Our great city just what The Doctor ordered 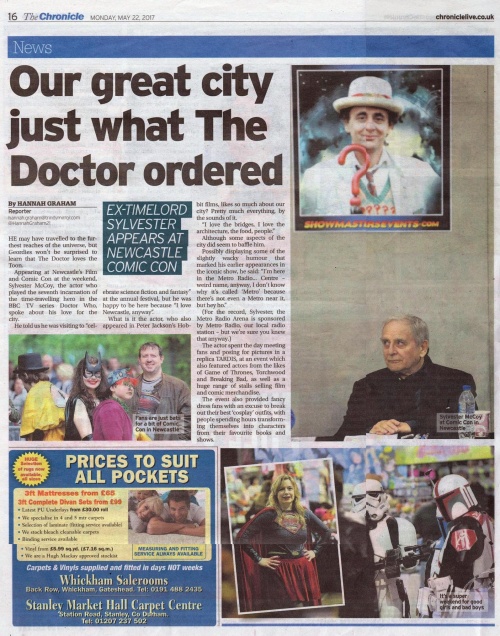 HE may have travelled to the furthest reaches of the universe, but Geordies won't be surprised to learn that The Doctor loves the Toon.

Appearing at Newcastle's Film and Comic Con at the weekend, Sylvester McCoy, the actor who played the seventh incarnation of the time-travelling hero in the BBC TV series Doctor Who, spoke about his love for the city.

He told us he was visiting to "celebrate science fiction and fantasy" at the annual festival, but he was happy to be here because "I love Newcastle, anyway".

What is it the actor, who also appeared in Peter Jackson's Hobbit films, likes so much about our city? Pretty much everything, by the sounds of it.

"I love the bridges, I love the architecture, the food, people!"

Although some aspects of the city did seem to baffle him.

Possibly displaying some of the slightly wacky humour, that marked his earlier appearances in the iconic show, he said: "I'm here in the Metro Radio... Centre weird name, anyway, I don't know why it's called 'Metro' because there's not even a Metro near it, but hey ho."

(For the record, Sylvester, the Metro Radio Arena is sponsored by Metro Radio, our local radio station - but we're sure you knew that anyway.)

The actor spent the day meeting fans and posing for pictures in a replica TARDIS, at an event which also featured actors from the likes of Game of Thrones, Torchwood and Breaking Bad, as well as a huge range of stalls selling film and comic merchandise.

The event also provided fancy dress fans with an excuse to break out their best 'cosplay' outfits, with people spending hours transforming themselves into characters from their favourite books and shows.

Caption: It's a super weekend for good girls and bad boys