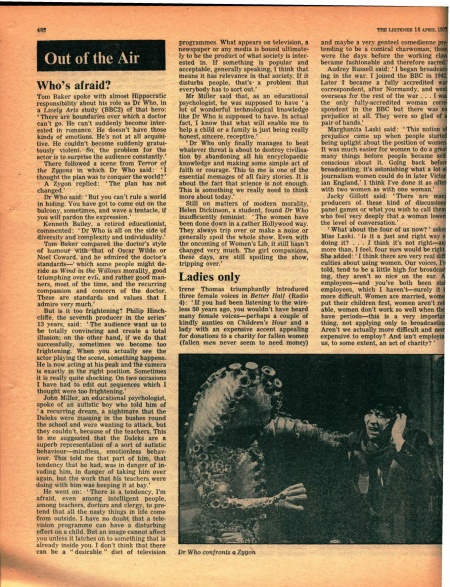 Tom Baker spoke with almost Hippocratic responsibility about his role as Dr Who, in a Lively Arts study (BBC2) of that hero: "There are boundaries over which a doctor can't go. He can't suddenly become interested in romance. He doesn't have those kinds of emotions. He's not at all acquisitive. He couldn't become suddenly gratuitously violent. So, the problem for the actor is to surprise the audience constantly."

There followed a scene from Terror of the Zygons in which Dr Who said: "I thought the plan was to conquer the world?"

A Zygon replied: "The plan has not changed."

Dr Who said: "But you can't rule a world in hiding. You have got to come out on the balcony, sometimes, and wave a tentacle, if you will pardon the expression."

Kenneth Bailey, a retired educationist, commented: "Dr Who is all on the side of diversity and complexity and individuality."

Tom Baker compared the doctor's style of humour with that of Oscar Wilde or Noel Coward, and he admired the doctor's standards— "which some people might deride as Wind in the Willows morality, good triumphing over evil, and rather good mariners, most of the time, and the recurring compassion and concern of the doctor. These are standards and values that I admire very much."

But is it too frightening? Philip Hinchcliffe, the seventh producer in the series' 13 years, said: "The audience want us to be totally convincing and create a total illusion; on the other hand, if we do that successfully, sometimes we become too frightening. When you actually see the actor playing the scene, something happens. He is now acting at his peak and the camera is exactly in the right position. Sometimes it is really quite shocking. On two occasions I have had to edit out sequences which I thought were too frightening."

John Miller, an educational psychologist, spoke of an autistic boy who told him of "a recurring dream, a nightmare that the Daleks were massing in the bushes round the school and were wanting to attack, but they couldn't, because of the teachers. This to me suggested that the Daleks are a superb representation of a sort of autistic behaviour—mindless, emotionless behaviour. This told me that part of him, that tendency that he had, was in danger of invading him, in danger of taking him over again, but the work that his teachers were doing with him was keeping it at bay."

He went on: "There is a tendency, I'm afraid, even among intelligent people, among teachers, doctors and clergy, to pretend that all the nasty things in life come from outside. I have no doubt that a television programme can have a disturbing effect on a child. But an image cannot affect you unless it latches on to something that is already inside you. I don't think that there can be a "desirable" diet of television programmes. What appears on television, a newspaper or any media is bound ultimately to be the product of what society is interested in. If something is popular and acceptable, generally speaking, I think that means it has relevance in that society. If it disturbs people, that's a problem that everybody has to sort out."

Mr Miller said that, as an educational psychologist, he was supposed to have "a lot of wonderful technological knowledge like Dr Who is supposed to have. In actual fact, I know that what will enable me to help a child or a family is just being really honest, sincere, receptive." "Dr Who only finally manages to beat whatever threat is about to destroy civilisation by abandoning all his encyclopaedic knowledge and making some simple act of faith or courage. This to me is one of the essential messages of all fairy stories. It is about the fact that science is not enough. This is something we really need to think more about today.'

Still on matters of modern morality, Helen Dickinson, a student, found Dr Who insufficiently feminist: "The women have been done down in a rather Hollywood way. They always trip over or make a noise or generally spoil the whole show. Even with the oncoming of Women's Lib, it still hasn't changed very much. The girl companions, these days, are still spoiling the show, tripping over.'

Caption: Dr Who confronts a Zygon