Return of 'Doctor Who' 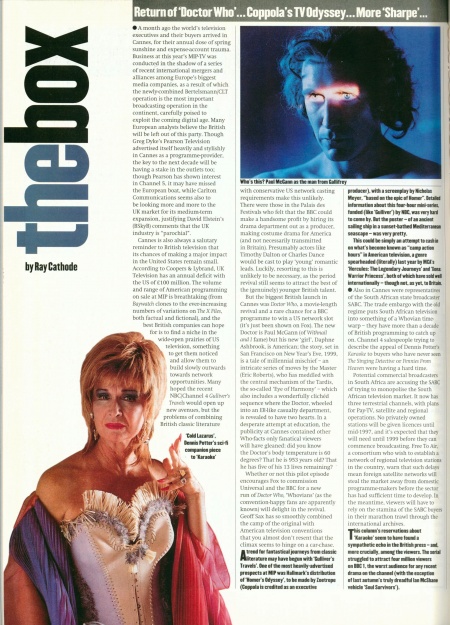 A month ago the world's television executives and their buyers arrived in Cannes, for their annual dose of spring sunshine and expense-account trauma. Business at this year's MIP-TV was conducted in the shadow of a series of recent international mergers and alliances among Europe's biggest media companies, as a result of which the newly-combined Bertelsmann/CLT operation is the most important broadcasting operation in the continent, carefully poised to exploit the coming digital age. Many European analysts believe the British will be left out of this party. Though Greg Dyke's Pearson Television advertised itself heavily and stylishly in Cannes as a programme-provider, the key to the next decade will be having a stake in the outlets too; though Pearson has shown interest in Channel 5, it may have missed the European boat, while Carlton Communications seems also to be looking more and more to the UK market for its medium-term expansion, justifying David Elstein's (BSkyB) comments that the UK industry is "parochial".

Cannes is also always a salutary reminder to British television that its chances of making a major impact in the United States remain small. According to Coopers & Lybrand, UK Television has an annual deficit with the US of £100 million. The volume and range of American programming on sale at MIP is breathtaking (from Baywatch clones to the ever-increasing numbers of variations on The X Files, both factual and fictional), and the best British companies can hope for is to find a niche in the wide-open prairies of US television, something to get them noticed and allow them to build slowly outwards towards network opportunities. Many hoped the recent NBC/Channel 4 Gulliver's Travels would open up new avenues, but the problems of combining British classic literature with conservative US network casting requirements make this unlikely. There were those in the Palais des Festivals who felt that the BBC could make a handsome profit by hiring its drama department out as a producer, making costume drama for America (and not necessarily transmitted in Britain). Presumably actors like Timothy Dalton or Charles Dance would be cast to play 'young' romantic leads. Luckily, resorting to this is unlikely to be necessary, as the period revival still seems to attract the best of the (genuinely) younger British talent.

But the biggest British launch in Cannes was Doctor Who, a movie-length revival and a rare chance for a BBC programme to win a US network slot (it's just been shown on Fox). The new Doctor is Paul McGann (of Withnail and I fame) but his new 'girl', Daphne Ashbrook, is American; the story, set in San Francisco on New Year's Eve, 1999, is a tale of millennial mischief - an intricate series of moves by the Master (Eric Roberts), who has meddled with the central mechanism of the Tardis, the so-called 'Eye of Harmony' - which also includes a wonderfully clichéd sequence where the Doctor, wheeled into an ER-like casualty department, is revealed to have two hearts. In a desperate attempt at education, the publicity at Cannes contained other Who-facts only fanatical viewers will have gleaned: did you know the Doctor's body temperature is 60 degrees? That he is 953 years old? That he has five of his 13 lives remaining?

Whether or not this pilot episode encourages Fox to commission Universal and the BBC for a new run of Doctor Who, 'Whovians' (as the convention-happy fans are apparently known) will delight in the revival. Geoff Sax has so smoothly combined the camp of the original with American television conventions that you almost don't resent that the climax seems to hinge on a car-chase.