Sabalon Glitz delivered a brilliant set at the Empty Bottle 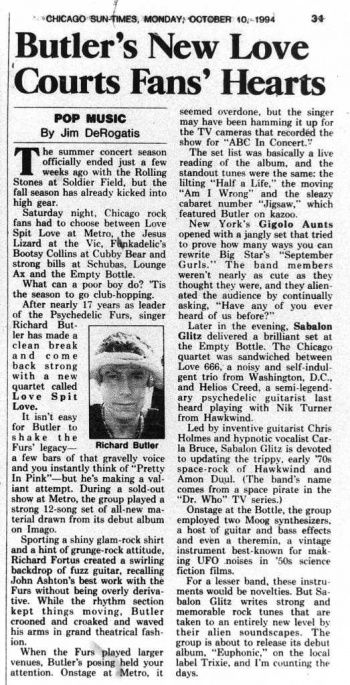 The summer concert season officially ended just a few weeks ago with the Rolling Stones at Soldier Field, but the fall season has already kicked into high gear.

Saturday night, Chicago rock fans had to choose between Love Spit Love at Metro, the Jesus Lizard at the Vic, Funkadelic's Bootsy Collins at Cubby Bear and strong bills at Schubas, Lounge Ax and the Empty Bottle.

What can a poor boy do? 'Tis the season to go club-hopping.

After nearly 17 years as leader of the Psychedelic Furs, singer Richard Butler has made a clean break and come back strong with a new quartet called Love Spit Love.

It isn't easy for Butler to shake the Furs' legacy - a few bars of that gravelly voice and you instantly think of "Pretty In Pink" - but he's making a valiant attempt. During a sold-out show at Metro, the group played a strong 12-song set of all-new material drawn from its debut album on Imago.

Sporting a shiny glam-rock shirt and a hint of grunge-rock attitude, Richard Fortus created a swirling backdrop of fuzz guitar, recalling John Ashton's best work with the Furs without being overly derivative. While the rhythm section kept things moving, Butler crooned and croaked and waved his arms in grand theatrical fashion.

When the Furs played larger venues, Butler's posing held your attention. Onstage at Metro, it seemed overdone, but the singer may have been hamming it up for the TV cameras that recorded the show for "ABC In Concert."

The set list was basically a live reading of the album, and the standout tunes were the same: the lilting "Half a Life," the moving "Am I Wrong" and the sleazy cabaret number "Jigsaw," which featured Butler on kazoo.

New York's Gigolo Aunts opened with a jangly set that tried to prove how many ways you can rewrite Big Star's "September Gurls." The band members weren't nearly as cute as they thought they were, and they alienated the audience by continually asking, "Have any of you ever heard of us before?"

Later in the evening, Sabalon Glitz delivered a brilliant set at the Empty Bottle. The Chicago quartet was sandwiched between Love 666, a noisy and self-indulgent trio from Washington, D.C., and Helios Creed, a semi-legendary psychedelic guitarist last heard playing with Nik Turner from Hawkwind.

Led by inventive guitarist Chris Holmes and hypnotic vocalist Carla Bruce, Sabalon Glitz is devoted to updating the trippy, early '70s space-rock of Hawkwind and Amon Duul. (The band's name comes from a space pirate in the "Dr. Who" TV series.)

Onstage at the Bottle, the group employed two Moog synthesizers, a host of guitar and bass effects and even a theremin, a vintage instrument best-known for making UFO noises in '50s science fiction films.

For a lesser band, these instruments would be novelties. But Sabalon Glitz writes strong and memorable rock tunes that are taken to an entirely new level by their alien soundscapes. The group is about to release its debut album, "Euphonic," on the local label Trixie, and I'm counting the days.