Difference between revisions of "Showing off wings and wheels" 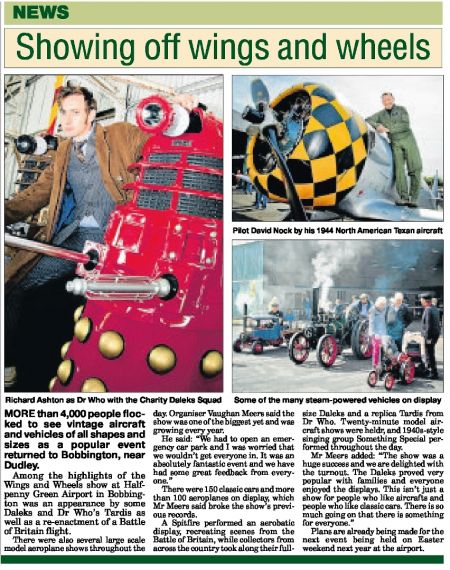 MORE than 4,000 people flocked to see vintage aircraft and vehicles of all shapes and sizes as a popular event returned to Bobbington, near Dudley.

Among the highlights of the Wings and Wheels show at Halfpenny Green Airport in Bobbing-ton was an appearance by some Daleks and Dr Who's Tardis as well as a re-enactment of a Battle of Britain flight.

There were also several large scale model aeroplane shows throughout the day. Organiser Vaughan Meers said the show was one of the biggest yet and was growing every year.

He said: "We had to open an emergency car park and I was worried that we wouldn't get everyone in. It was an absolutely fantastic event and we have had some great feedback from everyone."

There were 150 classic cars and more than 100 aeroplanes on display, which Mr Meers said broke the show's previous records.

A Spitfire performed an aerobatic display, recreating scenes from the Battle of Britain, while collectors from across the country took along their full-size Daleks and a replica Tardis from Dr Who. Twenty-minute model aircraft shows were heldr, and 1940s-style singing group Something Special performed throughout the day.

Mr Meers added: "The show was a huge success and we are delighted with the turnout. The Daleks proved very popular with families and everyone enjoyed the displays. This isn't just a show for people who like aircrafts and people who like classic cars. There is so much going on that there is something for everyone."

Plans are already being made for the next event being held on Easter weekend next year at the airport.

Richard Ashton as Dr Who with the Charity Daleks Squad

Some of the many steam-powered vehicles on display