Students swoon over 50 years of 'Doctor Who,' can't get enough 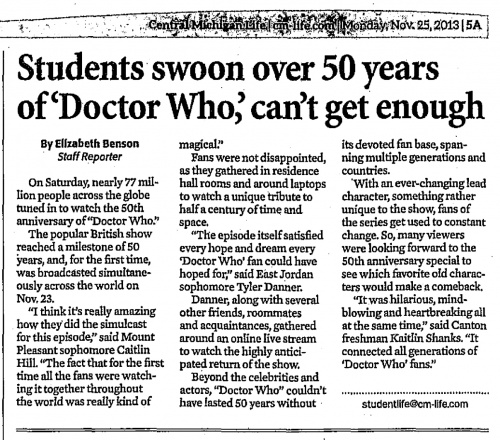 On Saturday, nearly 77 million people across the globe tuned in to watch the 50th anniversary of "Doctor Who."

The popular British show reached a milestone of 50 Years, and, for the first time, was broadcasted simultaneously across the world on Nov, 23.

"I think it's really amazing how they' did the simulcast for this episode," said Mount Pleasant sophomore Caitlin Hill. "The fact that for the first time all the fans were watching it together throughout the world was really kind of magical."

Pans were not disappointed, as they gathered in residence hall rooms and around laptops to watch a unique tribute to half a century of time and space.

"The episode itself satisfied every hope and dream every 'Doctor Who' fan could have hoped for," said East Jordan sophomore Tyler Danner.

Danner, along with several other friends, roommates and acquaintances, gathered around an online live stream to watch the highly anticipated return of the show.

Beyond the celebrities and actors, "Doctor Who" couldn't have lasted 50 years without its devoted fan base, spanning multiple generations and countries.

With an ever-changing lead character, something rather unique to the show, fans of the series get used to constant change. So, many viewers were looking forward to the 50th anniversary special to see which favorite old characters would make a comeback.

"It was hilarious, mind-blowing and heartbreaking all at the same time," said Canton freshman Mifflin, Shanks. "It connected all generations of 'Doctor Who' fans."