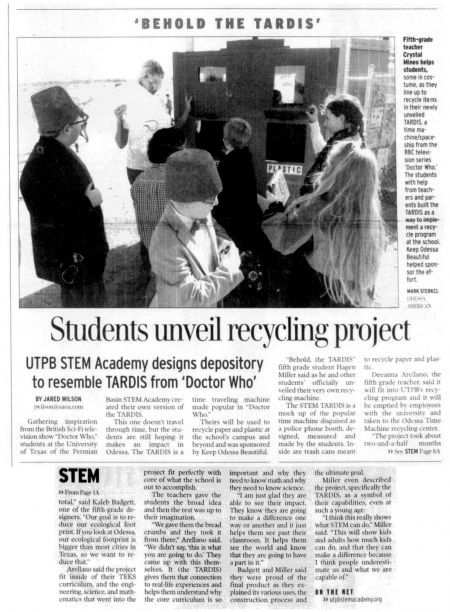 Gathering inspiration from the British Sci-Fi television show "Doctor Who," students at the University of Texas of the Permian Basin STEM Academy created their own version of the TARDIS.

This one doesn't travel through time, but the students are still hoping it makes an impact in Odessa. The TARDIS is a time traveling machine made popular in "Doctor Who."

Theirs will be used to recycle paper and plastic at the school's campus and beyond and was sponsored by Keep Odessa Beautiful.

"Behold, the TARDIS, fifth grade student Hagen Miller said as he and other students' officially unveiled their very own recycling machine.

The STEM TARDIS is a mock up of the popular time machine disguised as a police phone booth, designed, measured and made by the students. Inside are trash cans meant to recycle paper and plastic.

Deeanna Arellano, the fifth grade teacher, said it will fit into UTPB's recycling program and it will he emptied by employees with the university and taken to the Odessa Time Machine recycling center.

"The project took about two-and-a-half months total," said Kaleb liadgett, one of the fifth-grade designers. "Our goal is to reduce our ecological foot print. If you look at Odessa, our ecological footprint is bigger than most cities in Texas, so we want to reduce that."

Arellano said the project fit inside of their TEKS curriculum, and the engineering, science. and mathematics that went into the project tit perfectly with core of what the school is out to accomplish.

The teachers gave the students the broad idea and then the rest was up to their imagination.

"We gave them the bread crumbs and they took it from there." Arellano said. "We didn't say, 'this is what you are going to do: They came up with this themselves. It (the TARDIS) gives them that connection to real-life experiences and helps them understand why the core curriculum is so important and wily they need to know math and why they need to know science.

"I am just glad they are able to see their impact. They know they are going to make a difference one way or another and it just helps them see past their classroom. It helps them see the world and know that they arc going to have a part in it."

Badgctt and Miller said they were proud of the final product as they explained its various uses. the construction process and the ultimate goal.

Miller even described the project, specifically the TAR I ils, as a symbol of their capabilities, even at such a young age.

"I think this really shows what STEM can do," Miller said. "Phis will show kids and adults how much kids can do, and that they can make a difference because I think people underestimate. us and what we are capable of."

Caption: Fifth-grade teacher Crystal Mineo helps students, some to costume, as they line up to recycle ite ns in their newly unveiled TARDIS, a time ma-chine/space-ship from the BBC television series 'Doctor Who.' The students with help from teachers and parents built the TARDIS as a way to implement a recycle program at the school. Keep Odessa Beautiful helped sponsor the effort.