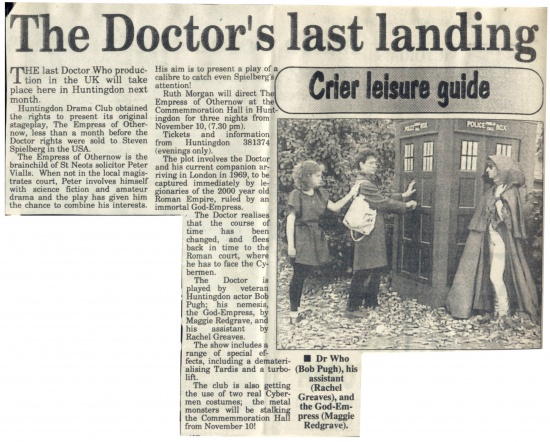 THE last Doctor Who production in the UK will take place here in Huntingdon next month.

Huntingdon Drama Club obtained the rights to present its original stageplay, The Empress of Other-now, less than a month before the Doctor rights were sold to Steven Spielberg in the USA.

The Empress of Othernow is the brainchild of St Neots solicitor Peter Vialls. When not in the local magistrates court, Peter involves himself with science fiction and amateur drama and the play has given him the chance to combine his interests. His aim is to present a play of calibre to catch even Spielberg's/ attention!

Ruth Morgan will direct The Empress of Othernow at thek Commemmoration Hall in Huntingdon for three nights from November 10, (7.30 pm).

Tickets and information from Huntingdon 381374 (evenings only).

The plot involves the Doctor and his current companion arriving in London in 1969, to be captured immediately by legionaries of the 2000 year old Roman Empire, ruled by an immortal God-Empress.

The Doctor realises that the course of time has been changed, and flees back in time to the Roman court, where he has to face the Cybermen.

The Doctor is played by veteran Huntingdon actor Bob Pugh; his nemesis, the God-Empress, by Maggie Redgrave, and his assistant by Rachel Greaves.

The show includes a range of special effects, including a dematerialising Tardis and a turbo-lift.

The club is also getting the use of two real Cyber-men costumes; the metal monsters will be stalking the Commemmoration Hall from November 10!