They came from outta here 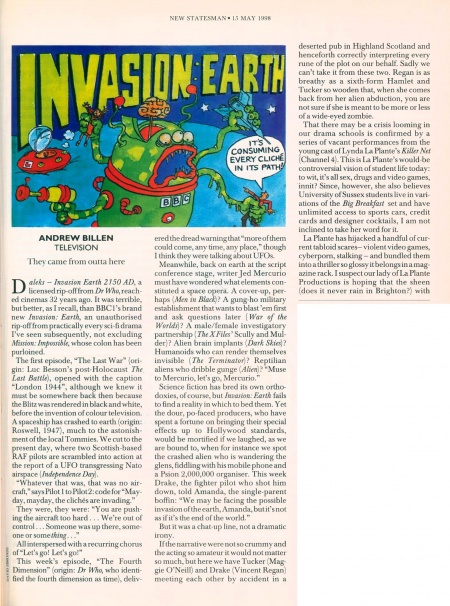 Daleks — Invasion Earth 2150 AD, a licensed rip-off from Dr Who, reached cinemas 32 years ago. It was terrible, but better, as I recall, than BBC 1's brand new Invasion: Earth, an unauthorised rip-off from practically every sci-fi drama I've seen subsequently, not excluding Mission: Impossible, whose colon has been purloined.

The first episode, "The Last War" (origin: Luc Besson's post-Holocaust The. Last Battle), opened with the caption "London 1944", although we knew it must be somewhere back then because the Blitz was rendered in black and white, before the invention of colour television. A spaceship has crashed to earth (origin: Roswell, 1947), much to the astonishment of the local Tommies. We cut to the present day, where two Scottish-based RAF pilots are scrambled into action at the report of a UFO transgressing Nato airspace (Independence Day).

"Whatever that was, that was no aircraft," says Pilot 1 to Pilot 2: code for "Mayday, mayday, the clichés are invading."

They were, they were: "You are pushing the aircraft too hard ... We're out of control .. . Someone was up there, someone or something..."

All interspersed with a recurring chorus of "Let's go! Let's go!"

This week's episode, "The Fourth Dimension" (origin: Dr Who, who identieed the fourth dimension as time), delivered the dread warning that "more of them could come, any time, any place," though I think they were talking about UFOs. Meanwhile, back on earth at the script conference stage, writer Jed Mercurio must have wondered what elements constituted a space opera. A cover-up, perhaps (Men in Black)? A gung-ho military establishment that wants to blast 'em first and ask questions later (War of the Worlds)? A male/female investigatory partnership (The X Files' Scully and Mulder)? Alien brain implants (Dark Skies)? Humanoids who can render themselves invisible (The Terminator)? Reptilian aliens who dribble gunge (Alien)? "Muse to Mercurio, let's go, Mercurio."

Science fiction has bred its own orthodoxies, of course, but Invasion: Earth fails to find a reality in which to bed them. Yet the dour, po-faced producers, who have spent a fortune on bringing their special effects up to Hollywood standards, would be mortified if we laughed, as we are bound to, when for instance we spot the crashed alien who is wandering the glens, fiddling with his mobile phone and a Psion 2,000,000 organiser. This week Drake, the fighter pilot who shot him down, told Amanda, the single-parent boffin: "We may be facing the possible invasion of the earth, Amanda, butit's not as if it's the end of the world."

But it was a chat-up line, not a dramatic irony.

If the narrative were not so crummy and the acting so amateur it would not matter so much, but here we have Tucker (Maggie O'Neill) and Drake (Vincent Regan) meeting each other by accident in a deserted pub in Highland Scotland and henceforth correctly interpreting every rune of the plot on our behalf. Sadly we can't take it from these two. Regan is as breathy as a sixth-form Hamlet and Tucker so wooden that, when she comes back from her alien abduction, you are not sure if she is meant to be more or less of a wide-eyed zombie.