Who's back but who is Who? 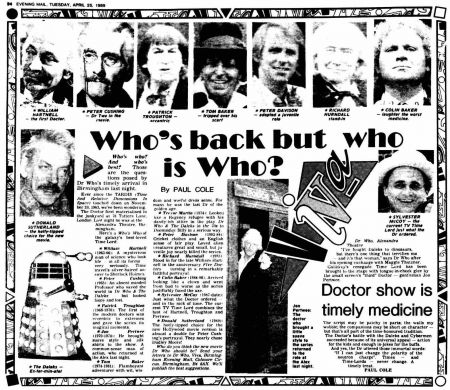 Who's Who? And Who's who? Those are the questions posed by Dr Who's timely arrival in Birmingham last night.

Ever since the TARDIS (Time And Relative Dimensions In Space) touched down on November 23, 1963, we've been wondering.

The Doctor first materialised in the junkyard at 76 Totters Lane, London. Last night he was at the Alexandra Theatre, Birmingham.

Here's a Who's Who of the galaxy's best-loved Time Lord:

★ William Hartnell (1963-66): A mysterious man of science who took life - in all its forms very seriously. Time travel's silver-haired answer to Sherlock Holmes.

★ Peter Cushing: (1965): An absent-minded Professor who saved the world in Dr Who & The Daleks but looked loopy and lost.

★ Patrick Troughton (1966-1970): The first of the modern doctors was eccentric to extremes and gave the series its magical moments.

★ Jon Pertwee: (1970-1974): He brought suave style and silk shirts to the show. A common-sense man of action, who returned at the Alex last night.

★ Tom Baker (1974-1981): Flamboyant adventurer with wit, wisdom and woeful dress sense. For many he was the last Dr of the golden age.

★ Trevor Martin (1974): Looked like a Regency refugee with his dandyish attire in the play Dr Who & The Daleks in the 70s to Doomsday. Silly in a serious way.

★ Richard Hurndall (1983): Stood in for the late William Hartnell in the anniversary Five Doctors turning in a remarkably faithful portrayal.

★ Colin Baker (1984-86): Arrived looking like a clown and went from bad to worse as the series justifiably faced the axe.

★ Sylvester McCoy (1987-date): Just what the Doctor ordered and in the nick of time. The current TV Time lord combines the best of Hartnell, Troughton and Pertwee.

Who do you think the me movie Dr Who should be? Send your letters to Dr Who. Viva Birmingham Evening Mail Colmore Circus, Birmingham. B4 6AX. We'll publish the best suggestions.

"I've fought Daleks to dinosaurs, but there's one thing that terrifies me - and it's that woman," says Dr Who after his opening exchange with Maggie Thatcher. Gallifrey's renegade Time Lord has been brought to the stage with tongue-in-cheek glee by the small screen's "Third" Doctor — gentleman Jon Pertwee.

The script may be patchy an parts; the walls my wobble; the companions may be short on character — but that's all part of the time-honoured tradition.

The Doctor's battle with the Daleks and Cybermen succeeded because of its universal appeal — action for the kids and enough in-jokes for the buffs. And yes, the Dr tittered those immortal words: "If I can just change the polarity of the neutron charge". Times — and Time-Lords — never change. A timely treat.