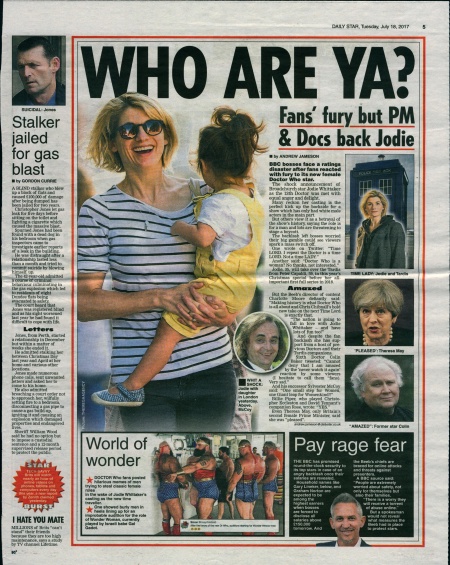 BBC bosses face a ratings disaster after fans reacted with fury to its new female Doctor Who star.

The shock announcement of Broadchurch star Jodie Whittaker as the 13th Doctor was met with equal anger and delight.

Many reckon her casting is the perfect kick up the backside for a show which has only had white male actors in the main part.

But others view it as a betrayal of the show's history, saying the role is for a man and lots are threatening to stage a boycott.

The backlash left bosses worried their big gamble could see viewers spark a mass switch off.

One wrote on Twitter: "Time LORD. I repeat the Doctor is a time LORD. Not a time LADY."

Another said: "Doctor Who is a woman? No thanks, not interested." Jodie, 35, will take over the Tardis from Peter Capaldi, 59, in this year's Christmas special before her all-important first full series in 2018.

But the Beeb's director of content Charlotte Moore defiantly said: "Making history is what Doctor Who is all about and Chris Chibnall's bold new take on the next Time Lord is exactly that.

"The nation is going to fall in love with Jodie Whittaker - and have lots of fun too!"

And despite the fan backlash she has support from a host of previous Doctors and their Tardis companions. Sixth Doctor Colin Baker tweeted: "Cannot deny that I am amazed by the 'never watch it again' reaction by some viewers (I hesitate to call them "fans). Very sad."

And his successor Sylvester McCoy said: "One small step for Women, one Giant leap for Womenkind!!" Billie Piper, who played Christopher Eccleston and David Tennant's companion Rose, wrote: "YES." Even Theresa May, only Britain's second female Prime Minister, said she was "pleased".

WHIT A SHOCK: Jodie with daughter in London yesterday. Above, McCoy

DOCTOR Who fans posted hilarious memes of men trying to steal classic female roles in the wake of Jodie Whittaker's casting as the new time traveller.

One showed burly men in heels lining up for an improbable audition for the role of Wonder Woman, currently played by Israeli babe Gal Gadot.