Yet another doctor in the parade of who's 'Who' 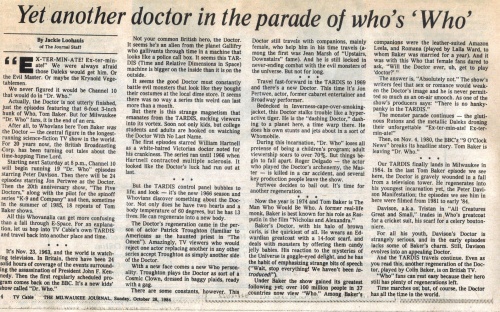 "EX-TER-MIN-ATE! Ex-ter-minate!" We were always afraid those Daleks would get him. Or the Evil Master. Or maybe the Krynoid Vegetablemen.

We never figured it would be Channel 10 that would do in "Dr. Who."

Actually, the Doctor is not utterly finished, just the episodes featuring that 6-foot 3-inch hunk of Who, Tom Baker. But for Milwaukee "Dr. Who" fans, it is the end of an era.

After all, to Whovians here Tom Baker was the Doctor — the central figure in the longest-running science-fiction TV show in the world. For 20 years now, the British Broadcasting Corp. has been turning out tales about the time-hopping Time Lord.

Starting next Saturday at 8 p.m., Channel 10 will begin running 19 "Dr. Who" episodes starring Peter Davison. Then there will be 24 episodes starring Jon Pertwee as the Doctor. Then the 20th anniversary show, "The Five Doctors," along with the pilot for the spinoff series "K-9 and Company" and then, sometime in the summer of 1985, 18 repeats of Tom Baker shows.

All this Whovanalia can get more confusing than a fall through E-Space. For an explanation, let us hop into TV Cable's own TARDIS and travel back into another place and time.

It's Nov. 23, 1963, and the world is watching television. In Britain, there have been 24 solid hours of coverage of the events surrounding the assassination of President John F. Kennedy. Then the first regularly scheduled program comes back on the BBC. It's a new kids' how called "Dr. Who."

Not your common British hero, the Doctor. It seems he's an alien from the planet Gallifry who gallivants through time in a machine that looks like a police call box. It seems this TARDIS (Time and Relative Dimensions in Space) machine is bigger on the inside than it is on the outside.

It seems the good Doctor must constantly battle evil monsters that look like they bought their costumes at the local dime store. It seems there was no way a series this weird can last more than a month.

But there is this strange magnetism that emanates from the TARDIS, sucking viewers into its vortex. Soon not only kids, but college students and adults are hooked on watching the Doctor With No Last Name.

The first episodes starred William Hartnell as a white-haired Victorian doctor noted for his crankiness. The series ran until 1966 when Hartnell contracted multiple sclerosis. It looked like the Doctor's luck had run out at last.

But the TARDIS control panel bubbles to life, and look — it's the new 1966 season and Whovians discover something about the Doctor. Not only does he have two hearts and a body temperature of 60 degrees, but he has 13 lives. He can regenerate into a new body.

The Doctor's regeneration came in the person of actor Patrick Troughton (familiar to Americans as the haunted priest in "The Omen"). Amazingly, TV viewers who would reject one actor replacing another in any other series accept Troughton as simply another side of the Doctor. With a new face comes a new Who personality. Troughton plays the Doctor as sort of a Cosmic Clown, dressed in baggy plaids, ready with a gag.

There are some constants, however. This Doctor still travels with companions, mainly female, who help him in his time travels (among the first was Jean Marsh of "Upstairs, Downstairs" fame). And he is still locked in never-ending combat with the evil monsters of the universe. But not for long.

Travel fast-forward in the TARDIS to 1969 and there's a new Doctor. This time it's Jon Pertwee, actor, former cabaret entertainer and Broadway performer.

Bedecked in Inverness-cape-over-smoking-jacket, this Doctor stalks trouble like a hyperactive tiger. He is the "dashing Doctor," dashing to a planet here, a time warp there. He does his own stunts and jets about in a sort of Whomobile.

During this incarnation, "Dr. Who" loses all pretense of being a children's program; adult viewership soars to over 70%. But things begin to fall apart. Roger Delgado — the actor who played the Doctor's archenemy, the Master — is killed in a car accident, and several key production people leave the show.

Pertwee decides to bail out. It's time for another regeneration.

Now the year is 1974 and Tom Baker is The Man Who Would Be Who. A former real-life monk, Baker is best known for his role as Rasputin in the film "Nicholas and Alexandra."

Baker's Doctor, with his halo of brown curls, is the quirkiest of all. He wears an Edwardian greatcoat with a 14-foot scarf, and deals with monsters by offering them candy jelly babies. His reaction to the mysteries of the Universe is goggle-eyed delight, and he has the habit of emphasizing strange bits of speech ("Wait, stop everything! We haven't been introduced!').

Under Baker the show gained its greatest following yet; over 100 million people in 37 countries now view "Who." Among Baker's companions were the leather-suited Amazon Leela, and Romana (played by Lalla Ward, to whom Baker was married for a year). And it was with this Who that female fans dared to ask, "Will the Doctor ever, uh, get to play 'doctor?'"

The answer is, "Absolutely not." The show's writers feel that sex or romance would weaken the Doctor's image and he is never permitted so much as an on-air smooch. As one of the show's producers says: "There is no hanky-panky in the TARDIS."

The monster parade continues — the glutinous Rutons and the metallic Daleks droning their unforgettable "Ex-ter-min-ate! Ex-termin-ate!"

Our TARDIS finally lands in Milwaukee in 1984. In the last Tom Baker episode we see here, the Doctor is gravely wounded in a fall from a television tower. He regenerates into his youngest incarnation yet, the Peter Davison Manifestation; the episodes we see him in here were filmed from 1981 to early '84.

Davison, a.k.a. Tristan in "All Creatures Great and Small," trades in Who's greatcoat for a cricket suit, his scarf for a celery boutonniere.

For all his youth, Davison's Doctor is strangely serious, and in the early episodes lacks some of Baker's charm. Still, Davison evolves into an appealing Doctor.

And the TARDIS travels continue. Even as you read this, another regeneration of the Doctor, played by Colin Baker, is on British TV.

"Who" fans can rest easy because their hero still has plenty of regenerations left.

Time marches on but, of course, the Doctor has all the time in the world.