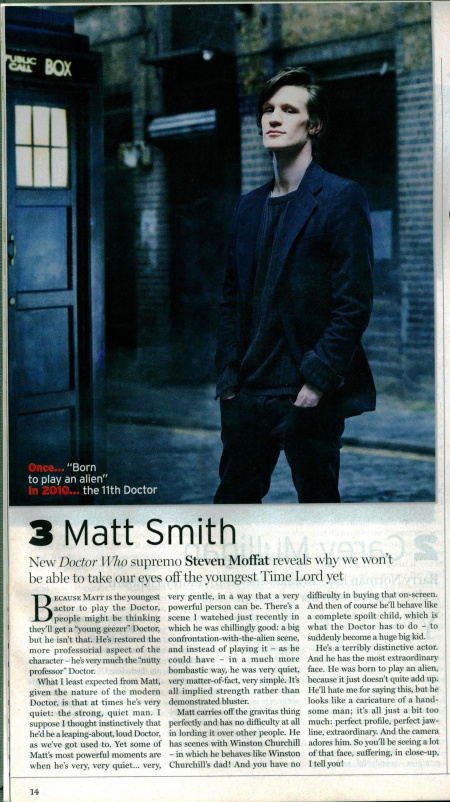 BECAUSE MATT is the youngest actor to play the Doctor, people might be thinking they'll get a "young geezer" Doctor, but he isn't that. He's restored the more professorial aspect of the character - he's very much the "nutty professor" Doctor.

What I least expected from Matt, given the nature of the modern Doctor, is that at times he's very quiet: the strong, quiet man. I suppose I thought instinctively that he'd be a leaping-about, loud Doctor, as we've got used to. Yet some of Matt's most powerful moments are when he's very, very quiet... very, very gentle, in a way that a very powerful person can be. There's a scene I watched just recently in which he was chillingly good: a big confrontation-with-the-alien scene, and instead of playing it - as he could have - in a much more bombastic way, he was very quiet, very matter-of-fact, very simple. It's all implied strength rather than demonstrated bluster.

Matt carries off the gravitas thing perfectly and has no difficulty at all in lording it over other people. He has scenes with Winston Churchill - in which he behaves like Winston Churchill's dad! And you have no difficulty in buying that on-screen. And then of course he'll behave like a complete spoilt child, which is what the Doctor has to do - to suddenly become a huge big kid.

He's a terribly distinctive actor. And he has the most extraordinary face. He was born to play an alien, because it just doesn't quite add up. He'll hate me for saying this, but he looks like a caricature of a handsome man; it's all just a bit too much: perfect profile, perfect jaw-line, extraordinary. And the camera adores him. So you'll be seeing a lot of that face, suffering, in close-up, I tell you!