A Brand-New Time Lord, but He Sounds Familiar 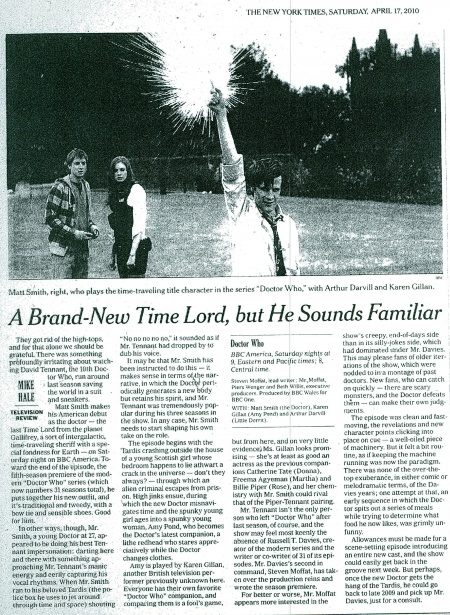 They got rid of the high-tops, and for that alone we should be grateful. There was something profoundly irritating about watching David Tennant, the 10th Doctor Who, run around last season saving the world in a suit and sneakers.

Matt Smith makes his American debut as the doctor--the last Time Lord from the planet Gallifrey, a sort of intergalactic, time-traveling sheriff with a special fondness for Earth--on Saturday night on BBC America. Toward the end of the episode, the fifth-season premiere of the modern "Doctor Who" series (which now numbers 31 seasons total), he puts together his new outfit, and it's traditional and tweedy, with a bow tie and sensible shoes: Good for him.

In other ways, though, Mr. Smith, a young Doctor at 27, appeared to be doing his best Tennant impersonation: darting here and there with something approaching Mr. Tennant's manic energy and eerily capturing his vocal rhythms. When Mr. Smith ran to his beloved Tardis (the police box he uses to jet around through time arid space) shouting "No no no no no; it sounded as if Mr. Tennant had dropped by to dub his voice.

It may be that Mr. 'Smith has been instructed to do this — it makes sense in terms of the narrative, in which the Doctor periodically generates a new body but retains his spirit, and Mr. Tennant was tremendously popular daring his three seasons in the show. In any case, Mr. Smith needs to start shaping his own take on the role.

The episode begins with the Tardis crashing outside the house of a young Scottish girl whose bedroom happens to lie athwart a crack in the universe — don't they always? — through which an alien criminal escapes from prison. High jinks ensue, during which the new Doctor misnavigates time and the spunky young girl ages into a spunky young woman, Amy Pond, who becomes the Doctor's latest companion, a lithe redhead Who stares appreciatively while the Doctor changes clothes.

Amy is played by Karen Gillan, another British television performer previously unknown here. Everyone has their own favorite "Doctor Who" companion, and comparing them is a fool's game, but from here, and on very little evidence, Ms. Gillan looks promising — she's at least as good an actress as the previous companions Catherine Tate (Donna), Freema Agyeman Martha) and Billie Piper (Rose) and her chemistry with Mr. Smith could rival that of the Piper-Tennant pairing.

Mr. Tennant isn't the only per-son who left "Doctor Who" after last season, of course, and the show may feel most keenly the absence of Russell T. Davies, creator of the modern series and the writer or co-writer of 31 of its episodes. Mr. Davies' second in command, Steven Moffat, has taken over the production reins and wrote the season premiere.

For better or worse, Mr. Moffat appears more interested in the show's creepy, end-of-days side than in its silly-jokes side, which had dominated under Mr. Davies. This may please fans of older iterations of the show, which were nodded to in a montage of past doctors. New fans, who can catch on quickly — there are scary monsters, and the Doctor defeats them — can make their own judgments.

The episode was clean and fast-moving, the revelations and new character points clicking into place on cue — a well-oiled piece of machinery. But it felt a bit routine, as if keeping the machine running was now the paradigm. There was none of the over-the-top exuberance, in either comic or melodramatic terms, of the Davies years; one attempt at that, an early sequence in which the Doctor spits out a series of meals while trying to determine what food he now likes, was grimly unfunny.

Allowances must be made for a scene-setting episode introducing an entire new cast, and the show could easily get back in the groove next week. But perhaps, once the new Doctor gets the hang of the Tardis, he could go back to late 2009 and pick up Mr. Davies, just for a consult.

Caption: Matt Smith, right, who plays the time-traveling title character in the series "Doctor Who," with Arthur Darvill and Karen Gillan.