A Dalek in the drive - and money in the bank 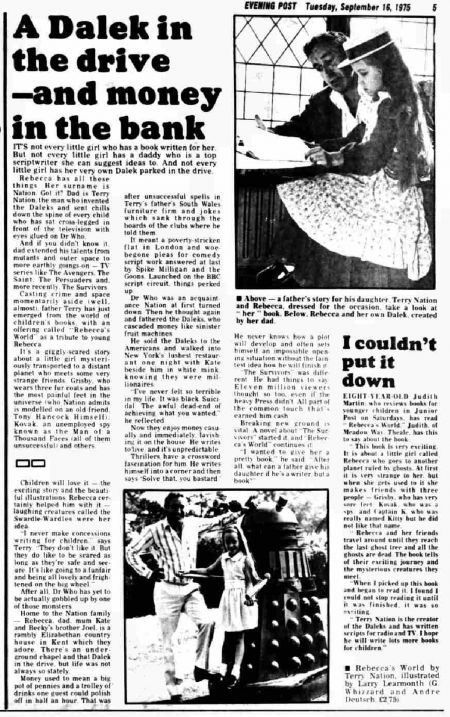 Rebecca has all these things. Her surname is Nation. Got it? Dad is Terry Nation. the man who invented the Daleks and sent chills down the spine of every child who has sat cross-legged in front of the television with eves glued on Dr Who.

And if you didn't know it. dad extended his talents from mutants and outer space to more earthly goings-on TV series like The Avengers, The Saint, The Persuaders and more recently, The Survivors.

Casting crime and space momentarily aside (well. almost). father Terry has just emerged from the world of children's books. with an offering called "Rebecca's World" - as a tribute to young Rebecca.

It's a giggly-seared story about a little girl mysteriously transported to a distant planet who meets some very strange friends: Grisby. who wears three fur coats and has the most painful feet in the universe (who Nation admits is modelled on an old friend. Tony Hancock Himself): Kovak, an unemployed spy known as the Man of a Thousand Faces (all of them unsuccessful) and others.

Children will love it - the exciting story and the beautiful illustrations. Rebecca certainly helped him with it - laughing creatures called the Sardle-Warles were her idea.

"I never make concessions writing for children," says Terry. "They don't like it. But they do like to be scared as long as they're safe and secure. It's like going to a funfair and being all lovely and frightened on the big wheel."

After all, Dr Who has yet to be actually gobbled up by one of those monsters.

Home of the Nation family - Rebecca, dad, mum Kate and Becky's brother Joel, is a rambly Elizabethan country house in Kent which they adore. There's an underground chapel and that Dalek in the drive, but life was not always so stately.

Money used to mean a big pot of pennies and a trolley of drinks one guest could polish off in half an hour. That was after unsuccessful spells in Terry's father's South Wales furniture firm and jokes which sank through the boards of the clubs where he told them.

It meant a poverty-stricken flat in London and woe-begon pleas for comedy script work answered at last by Spike Milligan and the Goons. Launched on the BBC script circuit, things perked up.

Dr Who was an acquaintance Nation at first turned down. Then he thought again and fathered the Daleks, who cascaded money like sinister fruit machines.

He sold the Daleks to the Americans and walked into New York's lushest restaurant one night with Kate beside him in white mink, knowing they were millionaires.

"I've never felt so terrible in my life. It was black. Suicidal. The awful dead-end of achieving what you wanted." he reflected.

Now they enjoy money casually and immediately, lavishing it on the house. He writes to live and it's unpredictable.

Thrillers, have a crossword fascination for him. He writes himself into a corner and then says 'Solve that. you bastard.'

He never knows how a plot will develop and often sets himself an impossible opening situation without the faintest idea how he will finish it.

"The Survivors" was different. He had things to say. Eleven million viewers thought so too, even if the heavy Press didn't. All part of the common touch that's earned him cash.

Breaking new ground is vital. A novel about "The Survivors" started it, and "Rebecca's World" continues it

"I wanted to give her a pretty book," he said. "After all, what can a father give his daughter if he's a writer, but a book?"

I couldn't put it down

EIGHT-YEAR-OLD Judith Martin, who reviews books for younger children in Junior Post on Saturdays. has read "Rebecca's World." Judith of Meadow Way, Theale, has this to say about the book:

"This book is very exciting. It is about a little girl called Rebecca who goes to another planet ruled by ghosts. At first it is very strange to her, but when she gets used to it she makes friends with three people - Grisby, who has very sore feet. Kovak, who was a spy and Captain K who was really named Kitty but he did not like that name.

"Rebecca and her friends travel around until they reach the last ghost tree and all the ghosts are dead. The book tells of their exciting journey and the mysterious creatures they meet.

"When I picked up this book and began to read it. I found I could not stop reading it until it was finished. it was so exciting."

"Terry Nation is the creator of the Daleks and has written scripts for radio and TV. I hope he will write lots more books for children."