A Dalek is (now) a many-splendoured thing 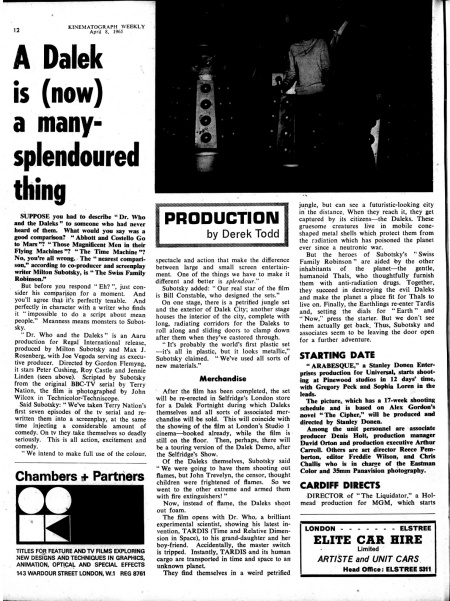 SUPPOSE you had to describe "Dr. Who and the Daleks" to someone who had never heard of them. What would you say was a good comparison? "Abbott and Costello Go to Mars"? "Those Magnificent Men in their Flying Machines"? "The Time Machine"? No, you're all wrong. The "nearest comparison," according to co-producer and screenplay writer Milton Subotsky, is "The Swiss Family Robinson."

But before you respond "Eh?", just consider his comparison for a moment. And you'll agree that it's perfectly tenable. And perfectly in character with a writer who finds it "impossible to do a script about mean people." Meanness means monsters to Subotsky.

"Dr. Who and the Daleks" is an Aaru production for Regal International release, produced by Milton Subotsky and Max J. Rosenberg, with Joe Vegoda serving as executive producer. Directed by Gordon Flemyng, it stars Peter Cushing, Roy Castle and Jennie Linden (seen above). Scripted by Subotsky from the original BBC-TV serial by Terry Nation, the film is photographed by John Wilcox in Technicolor-Techniscope.

Said Subotsky: "We've taken Terry Nation's first seven episodes of the tv serial and rewritten them into a screenplay, at the same time injecting a considerable amount of comedy. On tv they take themselves so deadly seriously. This is all action, excitement and comedy.

"We intend to make full use of the colour, spectacle and action that make the difference between large and small screen entertainment. One of the things we have to make it different and better is splendour."

Subotsky added: "Our real star of the film is Bill Constable, who designed the sets."

On one stage, there is a petrified jungle set and the exterior of Dalek City; another stage houses the interior of the city, complete with long, radiating corridors for the Daleks to roll along and sliding doors to clamp down after them when they've castored through.

"It's probably the world's first plastic set — it's all in plastic, but it looks metallic," Subotsky claimed. " We've used all sorts of new materials."

After the film has been completed, the set will be re-erected in Selfridge's London store for a Dalek Fortnight during which Daleks themselves and all sorts of associated merchandise will be sold. This will coincide with the showing of the film at London's Studio 1 cinema—booked already, while the film is still on the floor. Then, perhaps, there will he a touring version of the Dalek Demo, after the Selfridge's Show.

Of the Daleks themselves, Subotsky said "We were going to have them shooting out flames, but John Trevelyn, the censor, thought children were frightened of flames. So we went to the other extreme and armed them with fire extinguishers!"

Now, instead of flame, the Daleks shoot out foam.

The film opens with Dr. Who, a brilliant experimental scientist, showing his latest invention, TARDIS (Time and Relative Dimension in Space), to his grand-daughter and her boy-friend. Accidentally, the master switch is tripped. Instantly, TARDIS and its human cargo are transported in time and space to an unknown planet.

They find themselves in a weird petrified jungle, but can see a futuristic-looking city in the distance. When they reach it, they get captured by its citizens—the Daleks. These gruesome creatures live in mobile cone-shaped metal shells which protect them from the radiation which has poisoned the planet ever since a neutronic war.

But the heroes of Subotsky's "Swiss Family Robinson" are aided by the other inhabitants of the planet—the gentle, humanoid Thals, who thoughtfully furnish them with anti-radiation drugs. Together, they succeed in destroying the evil Daleks and make the planet a place fit for Thals to live on. Finally, the Earthlings re-enter Tardis and, setting the dials for "Earth" and "Now," press the starter. But we don't see them actually get back. Thus, Subotsky and associates seem to be leaving the door open for a further adventure.