A Doctor with gravitas 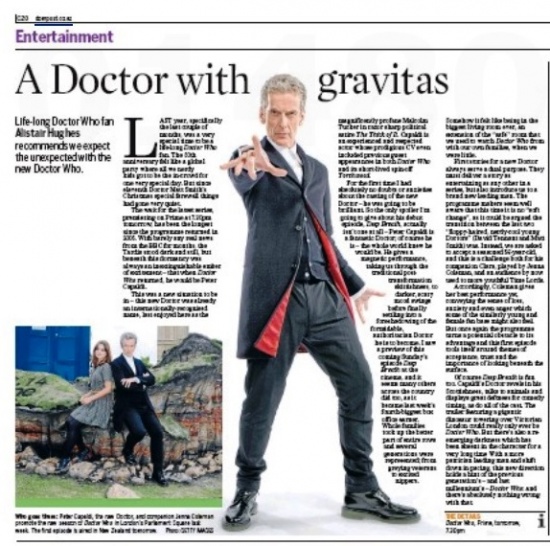 Life-long Doctor Who fan Alistair Hughes recommends we expect the unexpected with the new Doctor Who.

LAST year, specifically the last couple of months, was a very special time to be a life-long Doctor Who fan. The 50th anniversary felt like a global party where all we nerdy kids got to be the in-crowd for one very special day. But since eleventh Doctor Matt Smith's Christmas special farewell things had gone very quiet.

The wait for the latest series, premiering on Prime at 7.30pm tomorrow, has been the longest since the programme returned in 2005. With barely any real news from the BBC for months, the Tardis stood dark and still, but beneath this dormancy was always an inextinguishable ember of excitement – that when Doctor Who returned, he would be Peter Capaldi.

This was a new situation to be in – this new Doctor was already an internationally-recognised name, last enjoyed here as the magnificently profane Malcolm Tucker in razor sharp political satire The Thick of It. Capaldi is an experienced and respected actor whose prodigious CV even included previous guest appearances in both Doctor Who and its short-lived spin-off Torchwood.

For the first time I had absolutely no doubts or anxieties about the casting of the new Doctor – he was going to be brilliant. So the only spoiler I'm going to give about his debut episode, Deep Breath, actually isn't one at all – Peter Capaldi is a fantastic Doctor; of course he is – the whole world knew he would be. He gives a magnetic performance, taking us through the traditional post-transformation skittishness, to darker, scary mood swings before finally settling into a foreshadowing of the formidable, authoritarian Doctor he is to become. I saw a preview of this coming Sunday's episode Deep Breath at the cinema, and it seems many others across the country did too, as it became last week's fourth-biggest box office earner. Whole families took up the better part of entire rows and several generations were represented; from greying veterans to excited nippers. Somehow it felt like being in the biggest living room ever, an extension of the "safe" room that we used to watch Doctor Who from with our own families, when we were little.

First stories for a new Doctor always serve a dual purpose. They must deliver a story as entertaining as any other in a series, but also introduce us to a brand new leading man. The programme makers seem well aware that this time it is no "soft change", as it could be argued the transition between the last two "floppy-haired, nerdy-cool young Doctors" (David Tennant and Matt Smith) was. Instead, we are asked to accept a seasoned 56-year-old, and this is a challenge both for his companion Clara, played by Jenna Coleman, and an audience by now used to more youthful Time Lords.

Accordingly, Coleman gives her best performance yet, conveying the sense of loss, anxiety and even anger which some of the similarly young and female fan base might also feel. But once again the programme turns a potential obstacle to its advantage and this first episode tools itself around themes of acceptance, trust and the importance of looking beneath the surface.

Of course Deep Breath is fun too. Capaldi's Doctor revels in his Scottishness, talks to animals and displays great deftness for comedy timing, as do all of the cast. The trailer featuring a gigantic dinosaur towering over Victorian London could really only ever be Doctor Who. But there's also a reemerging darkness which has been absent in the character for a very long time With a more patrician leading man and shift down in pacing, this new direction holds a hint of the previous generation's – and last millennium's – Doctor Who: and there's absolutely nothing wrong with that.