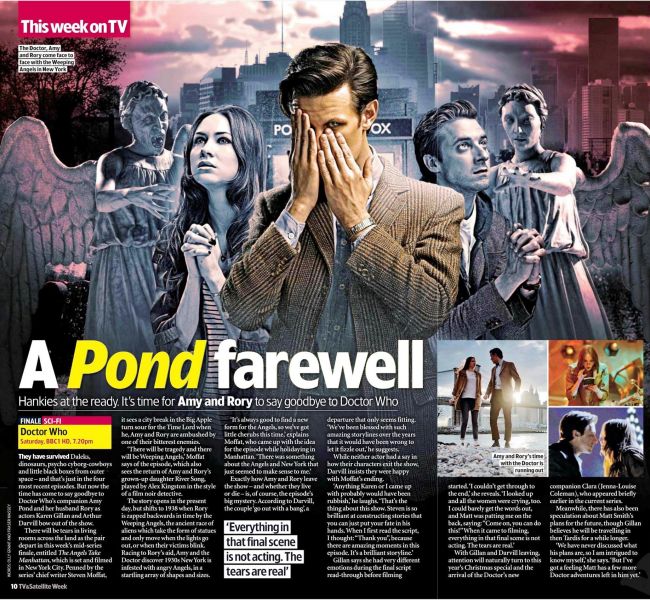 Hankies at the ready. It's time for Amy and Rory to say goodbye to Doctor Who

They have survived Daleks, dinosaurs, psycho cyborg-cowboys and little black boxes from outer space— and that's just in the four most recent episodes. But now the time has come to say goodbye to Doctor Who's companion Amy Pond and her husband Rory as actors Karen Gillan and Arthur Darvill bow out of the show.

There will be tears in living rooms across the land as the pair depart in this week's mid-series finale, entitled The Angels Take Manhattan, which is set and filmed in New York City. Penned by the series' chief writer Steven Moffat, it sees a city break in the Big Apple turn sour for the Time Lord when he, Amy and Rory are ambushed by one of their bitterest enemies.

'There will be tragedy and there will be Weeping Angels,' Moffat says of the episode, which also sees the return of Amy and Rory's grown-up daughter River Song, played by Alex Kingston in the style of a film noir detective.

The story opens in the present day, but shifts to 1938 when Rory is zapped backwards in time by the Weeping Angels, the ancient race of aliens which take the form of statues and only move when the lights go out, or when their victims blink. Racing to Rory's aid, Amy and the Doctor discover 1930s New York is infested with angry Angels, in a startling array of shapes and sizes.

'It's always good to find a new form for the Angels, so we've got little cherubs this time, explains Moffat, who came up with the idea for the episode while holidaying in Manhattan. 'There was something about the Angels and New York that just seemed to make sense to me:

Exactly how Amy and Rory leave the show— and whether they live or die — is, of course, the episode's big mystery. According to Darvill, the couple 'go out with a bang,' a departure that only seems fitting. 'We've been blessed with such amazing storylines over the years that it would have been wrong to let it fizzle out,' he suggests.

While neither actor had a say in how their characters exit the show, Darvill insists they were happy with Moffat's ending.

'Anything Karen or I came up with probably would have been rubbish; he laughs. 'That's the thing about this show. Steven is so brilliant at constructing stories that you can just put your fate in his hands. When I first read the script, I thought: "Thank you", because there are amazing moments in this episode. It's a brilliant storyline.'

Gillan says she had very different emotions during the final script read-through before filming started. 'I couldn't get through to the end, she reveals. 'I looked up and all the women were crying, too. I could barely get the words out, and Matt was patting me on the back, saying: "Come on, you can do this! "When it came to filming, everything in that final scene is not acting. The tears are real.'

With Gillan and Darvill leaving, attention will naturally turn to this year's Christmas special and the arrival of the Doctor's new companion Clara (Jenna-Louise Coleman), who appeared briefly earlier in the current series.

Meanwhile, there has also been speculation about Matt Smith's plans for the future, though Gillan believes he will be travelling in then Tardis for a while longer.

'We have never discussed what his plans are, so I am intrigued to know myself, she says. 'But I've got a feeling Matt has a few more Doctor adventures left in him yet.'