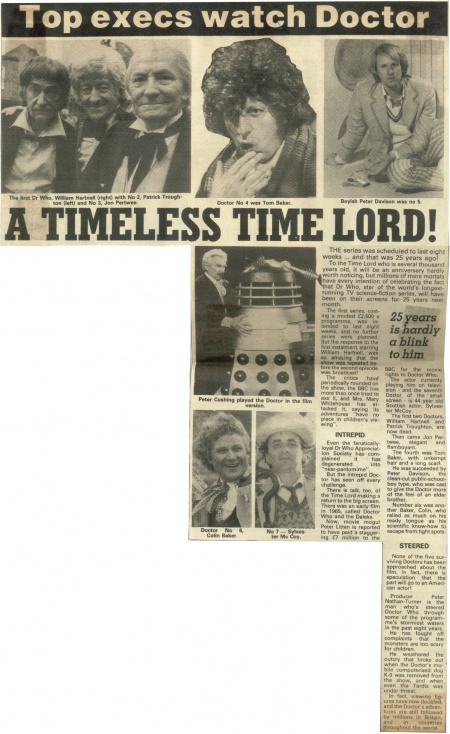 THE series was scheduled to last eight weeks ... and that was 25 years ago!

To the Time Lord who is several thousand years old, it will be an anniversary hardly worth noticing, but millions of mere mortals have every intention of celebrating the fact that Dr Who, star of the world's longest-running TV science-fiction series, will have been on their screens for 25 years next month.

The first series, costing a modest £2,500 a programme, was intended to last eight weeks, and no further series were planned. But the response to the first instalment, starring William Hartnell, was so amazing that the show was repeated before the second episode was broadcast!

The critics have periodically rounded on the show, the BBC has more than once tried to axe it, and Mrs. Mary Whitehouse has attacked it, saying its adventures "have no place in children's viewing".

Even the fanatically-loyal Dr Who Appreciation Society has complained it has degenerated into "near-pantomime".

But the intrepid Doctor has seen off every challenge.

There is talk, too, of the Time Lord making a return to the big screen. There was an early film in 1965, called Doctor Who and the Daleks.

Now, movie mogul Peter Litten is reported to have paid a staggering £7 million to the BBC for the movie rights to Doctor Who. The actor currently playing him on television - and the seventh Doctor of the small screen - is 44 year old Scottish actor, Sylvester McCoy.

The fourth was Tom Baker, with unkempt hair and a long scarf.

He was succeeded by Peter Davison, the clean-cut public-schoolboy type, who was cast to give the Doctor more of the feel of an elder brother.

Number six was another Baker, Colin, who relied as much on his ready tongue as his scientific know-how to escape from tight spots.

None of the five surviving Doctors has been approached about the film. In fact, there is speculation that the part will go to an American actor!

Producer Peter Nathan-Turner is the man who's steered Doctor Who through some of the programme's stormiest waters in the past eight years. He has fought off complaints that the monsters are too scary for children.

He weathered the outcry that broke out when the Doctor's mobile computerised dog K-9 was removed from the show, and when even the Tardis was under threat.

In fact, viewing figures have now doubled, and the Doctor's adventures are still followed by millions in Britain, and in countries throughout the world.

The first Dr Who, William Hartnell (right) with No 2, Patrick Troughton (left) and No 3, Jon Pertwee.

Doctor No 4 was Tom Baker.

Boyish Peter Davison was no 5.

Peter Cushing played the Doctor in the film version.