A Word With Peter Capaldi 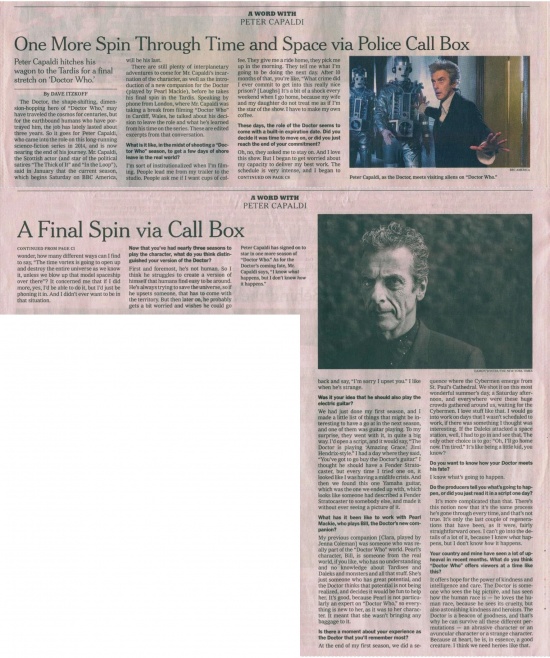 A Word With Peter Capaldi

Peter Capaldi, as the Doctor, meets visiting aliens on "Doctor Who."

The Doctor, the shape-shifting, dimension-hopping hero of "Doctor Who," may have traveled the cosmos for centuries, but for the earthbound humans who have portrayed him, the job has lately lasted about three years. So it goes for Peter Capaldi, who came into the role on this long-running science-fiction series in 2014, and is now nearing the end of his journey. Mr. Capaldi, the Scottish actor (and star of the political satires "The Thick of It" and "In the Loop"), said in January that the current season, which begins Saturday on BBC America, will be his last.

There are still plenty of interplanetary adventures to come for Mr. Capaldi's incarnation of the character, as well as the introduction of a new companion for the Doctor (played by Pearl Mackie), before he takes his final spin in the Tardis. Speaking by phone from London, where Mr. Capaldi was taking a break from filming "Doctor Who" in Cardiff, Wales, he talked about his decision to leave the role and what he's learned from his time on the series. These are edited excerpts from that conversation.

What is it like, in the midst of shooting a "Doctor Who" season, to get a few days of shore leave in the real world?

I'm sort of institutionalized when I'm filming. People lead me from my trailer to the studio. People ask me if I want cups of coffee. They give me a ride home, they pick me up in the morning. They tell me what I'm going to be doing the next day. After 10 months of that, you're like, "What crime did I ever commit to get into this really nice prison? [Laughs] It's a bit of a shock every weekend when I go home, because my wife and my daughter do not treat me as if I'm the star of the show. I have to make my own coffee.

These days, the role of the Doctor seems to come with a built-in expiration date. Did you decide it was time to move on, or did you just reach the end of your commitment?

Oh, no, they asked me to stay on. And I love this show. But I began to get worried about my capacity to deliver my best work. The schedule is very intense, and I began to wonder, how many different ways can I find to say, "The time vortex is going to open up and destroy the entire universe as we know it, unless we blow up that model spaceship over there"? It concerned me that if I did more, yes, I'd be able to do it, but I'd just be phoning it in. And I didn't ever want to be in that situation.

Now that you've had nearly three seasons to play the character, what do you think distinguished your version of the Doctor?

First and foremost, he's not human. So I think he struggles to create a version of himself that humans find easy to be around. He's always trying to save the universe, so if he upsets someone, that has to come with the territory. But then later on, he probably gets a bit worried and wishes he could go back and say, "I'm sorry I upset you." I like when he's strange.

Was it your idea that he should also play the electric guitar?

We had just done my first season, and I made a little list of things that might be interesting to have a go at in the next season, and one of them was guitar playing. To my surprise, they went with it, in quite a big way. I'd open a script, and it would say, "The Doctor is playing 'Amazing Grace,' Jimi Hendrix-style." I had a day where they said, "You've got to go buy the Doctor's guitar." I thought he should have a Fender Strato-caster, but every time I tried one on, it looked like I was having a midlife crisis. And then we found this one Yamaha guitar, which was the one we ended up with, which looks like someone had described a Fender Stratocaster to somebody else, and made it without ever seeing a picture of it.

What has it been like to work with Pearl Mackie, who plays Bill, the Doctor's new companion?

My previous companion [Clara, played by Jenna Coleman] was someone who was really part of the "Doctor Who" world. Pearl's character, Bill, is someone from the real world, if you like, who has no understanding and no knowledge about Tardises and Daleks and monsters and all that stuff. She's just someone who has great potential, and the Doctor thinks that potential is not being realized, and decides it would be fun to help her. It's good, because Pearl is not particularly an expert on "Doctor Who," so everything is new to her, as it was to her character. It meant that she wasn't bringing any baggage to it.

Is there a moment about your experience as the Doctor that you'll remember most?

At the end of my first season, we did a sequence where the Cybermen emerge from St. Paul's Cathedral. We shot it on this most wonderful summer's day, a Saturday afternoon, and everywhere were these huge crowds gathered around us, waiting for the Cybermen. I love stuff like that. I would go into work on days that I wasn't scheduled to work, if there was something I thought was interesting. If the Daleks attacked a space station, well, I had to go in and see that. The only other choice is to go: "Oh, I'll go home now. I'm tired." It's like being a little kid, you know?

Do you want to know how your Doctor meets his fate?

I know what's going to happen.

Do the producers tell you what's going to happen, or did you just read it in a script one day?

It's more complicated than that. There's this notion now that it's the same process he's gone through every time, and that's not true. It's only the last couple of regenerations that have been, as it were, fairly straightforward ones. I can't go into the details of a lot of it, because I know what happens, but I don't know how it happens.

Your country and mine have seen a lot of upheaval in recent months. What do you think "Doctor Who" offers viewers at a time like this?

It offers hope for the power of kindness and intelligence and care. The Doctor is someone who sees the big picture, and has seen how the human race is — he loves the human race, because he sees its cruelty, but also astonishing kindness and heroism. The Doctor is a beacon of goodness, and that's why he can survive all these different permutations — an abrasive character or an avuncular character or a strange character. Because at heart, he is, in essence, a good creature. I think we need heroes like that.

Peter Capaldi hitches his wagon to the Tardis for a final stretch on 'Doctor Who.'