A blast from the past and the future - it's Doctor Who 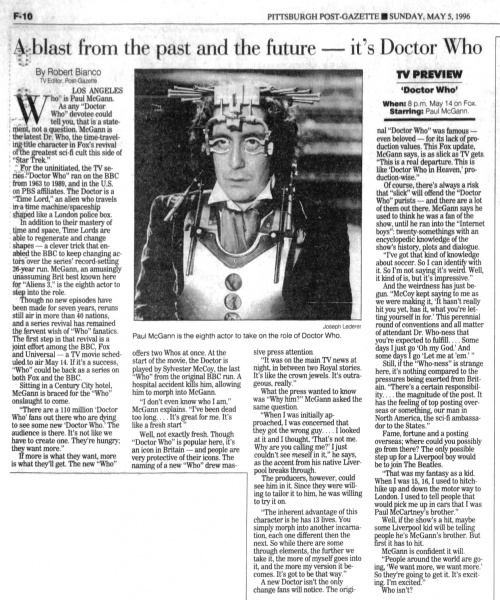 "Who" is Paul McGann.

As any "Doctor Who" devotee could tell you, that is a statement, not a question. McGann is the latest Dr. Who, the time-traveling title character in Fox's revival of the greatest sci-fi cult this side of "Star Trek."

For the uninitiated, the TV series "Doctor Who" ran on the BBC from 1963 to 1989, and in the United States on PBS affiliates. The Doctor is a "Time Lord," an alien who travels in a time machine/spaceship shaped like a London police box.

In addition to their mastery of time and space, Time Lords are able to regenerate and change shapes - a clever trick that enabled the BBC to keep changing actors over the series' record-setting 26-year run. McGann, an amusingly unassuming Brit best known here for "Aliens 3," is the eighth actor to step into the role.

Though no new episodes have been made for seven years, reruns still air in over 40 nations, and a series revival has remained the fervent wish of "Who" fanatics. The first step in that revival is Tuesday's movie, a joint effort among the BBC, Fox and Universal. If it's a success, "Who" could be back as a series on both Fox and the BBC.

Sitting in a Century City hotel, McGann is braced for the "Who" onslaught to come.

If more is what they want, more is what they'll get: the new "Who" offers two Who's at once. At the start of the movie, the Doctor is played by Sylvester McCoy, the last "Who" from the original BBC run. A hospital accident kills him, allowing him to morph into McGann.

Well, not exactly fresh. Though "Dr. Who" is popular here, it's an icon in Britain - and people are very protective of their icons. The naming of a new "Who" drew massive press attention.

"It was on the main TV news at night, in between two Royal stories... . It's like the crown jewels. It's outrageous, really."

What the press wanted to know was "Why him?" McGann asked the same question.

"When I was initially approached, I was concerned that they got the wrong guy... . I looked at it and I thought, 'That's not me. Why are you calling me?' I just couldn't see meself in it," he says, as the accent from his native Liverpool breaks through.

The producers, however, could see him in it. Since they were willing to tailor it to him, he was willing to try it on.

"The inherent advantage of this character is he has 13 lives. You simply morph into another incarnation, each one different than the next. So while there are some through elements, the further we take it, the more of myself goes into it, and the more my version it becomes. It's got to be that way."

A new Doctor isn't the only change fans will notice. The original "Doctor Who" was famous, even beloved, for its lack of production values. This Fox update, McGann says, is as slick as TV gets. "This is a real departure. This is like 'Dr. Who in Heaven,' production-wise."

Of course, there's always a risk that "slick" will offend the "Dr. Who" purists - and there are a lot of them out there. McGann says he used to think he was a fan of the show, until he ran into the "internet boys": twenty-somethings with an encyclopedic knowledge of the show's history, plots and dialogue.

"I've got that kind of knowledge about soccer. So I can identify with it. So I'm not saying it's weird. Well, it kind of is, but it's impressive."

And the weirdness has just begun. "McCoy kept saying to me as we were making it, 'It hasn't really hit you yet, has it, what you're letting yourself in for.' This perennial round of conventions and all matter of attendant Dr. Whoness that you're expected to fulfill... . It takes some getting your head round. Some days I just go 'Oh my gosh.' And some days I go 'Let me at 'em.' "

Still, if the "Whoness" is strange here, it's nothing compared to the pressures being exerted from Britain. "There's a certain responsibility... . It's beginning to dawn on me, the magnitude of the post. It has the feeling of top posting overseas or something, our man in North America, the sci-fi ambassador to the States."

Fame, fortune and a posting overseas; where could you possibly go from there? The only possible step up for a Liverpool boy would be to join the Beatles.

"That was my fantasy as a kid. When I was 15, 16 I used to hitchhike up and down the motorway to London... . I used to tell people that would pick me up in cars that I was Paul McCartney's brother."

Well, if the show's a hit, maybe some Liverpool kid will be telling people he's McGann's brother. But first it has to hit.

McGann is confident it will.

"People around the world are going, 'We want more, we want more.' So they're going to get it. It's exciting. I'm excited."

Memo: He's the latest actor to play the lead character in the latest incarnation of 'Dr. Who' - this one on Fox.