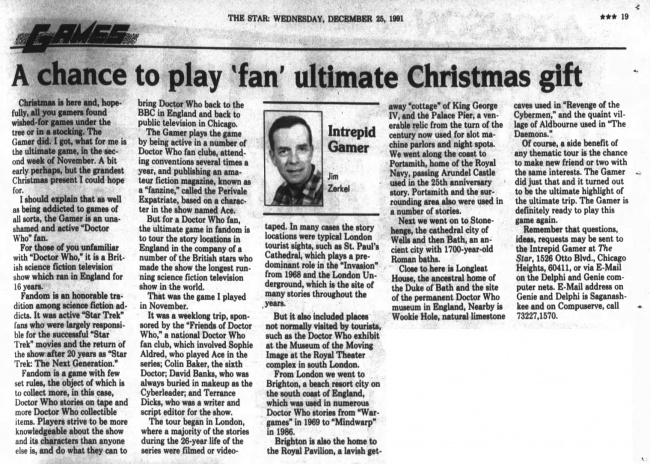 Christmas is here and, hopefully, all you gamers found wished-for games under the tree or in a stocking. The Gamer did. I got, what for me is the ultimate game, in the second week of November. A bit early perhaps, but the grandest Christmas present I could hope for.

I should explain that as well as being addicted to games of all sorts, the Gamer is an unashamed and active "Doctor Who" fan.

For those of you unfamiliar with "Doctor Who," it is a British science fiction television show which ran in England for 16 years.

Fandom is an honorable tradition among science fiction addicts. It was active "Star Trek" fans who were largely responsible for the successful "Star Trek" movies and the return of the show after 20 years as "Star Trek: The Next Generation."

Fandom is a game with few set rules, the object of which is to collect more, in this case, Doctor Who stories on tape and more Doctor Who collectible items. Players strive to be more knowledgeable about the show and its characters than anyone else is, and do what they can to bring Doctor Who back to the BBC in England and back to public television in Chicago.

The Gamer plays the game by being active in a number of Doctor Who fan clubs, attending conventions several times a year, and publishing an amateur fiction magazine, known as a "fanzine," called the Perivale Expatriate, based on a character in the show named Ace.

But for a Doctor Who fan, the ultimate game in fandom is to tour the story locations in England in the company of a number of the British stars who made the show the longest running science fiction television show in the world.

That was the game I played in November.

It was a weeklong trip, sponsored by the "Friends of Doctor Who," a national Doctor Who fan club, which involved Sophie Aldred, who played Ace in the series; Colin Baker, the sixth Doctor; David Banks, who was always buried in makeup as the Cyberleader; and Terrance Dicks, who was a writer and script editor for the show.

'Ile tour began in London, where a majority of the stories during the 26-year life of the series were filmed or videotaped. In many cases the story locations were typical London tourist sights, such as St. Paul's Cathedral, which plays a predominant role in the "Invasion" from 1968 and the London Underground, which is the site of many stories throughout the years.

But it also included places not normally visited by tourists, such as the Doctor Who exhibit at the Museum of the Moving Image at the Royal Theater complex in south London.

From London we went to Brighton, a beach resort city on the south coast of England, which was used in numerous Doctor Who stories from "Wargames" in 1969 to "Mindwarp" in 1986.

Brighton is also the home to the Royal Pavilion, a lavish get away "cottage" of King George IV, and the Palace Pier, a venerable relic from the turn of the century now used for slot machine parlors and night spots. We went along the coast to Portsmith, home of the Royal Navy, passing Arundel Castle used in the 25th anniversary story. Portsmith and the surrounding area also were used in a number of stories.

Next we went on to Stonehenge, the cathedral city of Wells and then Bath, an ancient city with 1700-year-old Roman baths.

Close to here is Longleat House, the ancestral home of the Duke of Bath and the site of the permanent Doctor Who museum in England, Nearby is Wookie Hole, natural limestone caves used in "Revenge of the Cybermen," and the quaint village of Aldbourne used in "The Daemons."

Of course, a side benefit of any thematic tour is the chance to make new friend or two with the same interests. The Gamer did just that and it turned out to be the ultimate highlight of the ultimate trip. The Gamer is definitely ready to play this game again.

Remember that questions, ideas, requests may be sent to the Intrepid Gamer at The Star, 1526 Otto Blvd., Chicago Heights, 60411, or via E-Mail on the Delphi and Genie computer nets. E-Mail address on Genie and Delphi is Saganashkee and on Compuserve, call 73227,1570.