A doctor with his work cut out 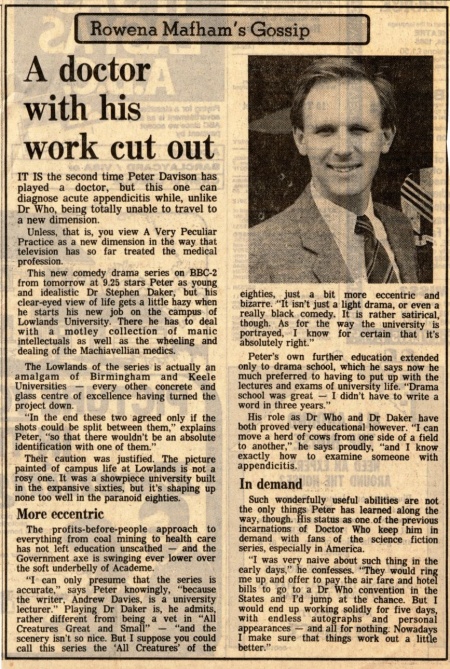 IT IS the second time Peter Davison has played a doctor, but this one can diagnose acute appendicitis while, unlike Dr Who, being totally unable to travel to a new dimension.

Unless, that is, you view A Very Peculiar Practice as a new dimension in the way that television has so far treated the medical profession.

This new comedy drama series on BBC-2 from tomorrow at 9.25 stars Peter as young and idealistic Dr Stephen Daker, but his clear-eyed view of life gets a little hazy when he starts his new job on the campus of Lowlands University. There he has to deal with a motley collection of manic intellectuals as well as the wheeling and dealing of the Machiavellian medics.

The Lowlands of the series is actually an amalgam of Birmingham and Keele Universities — every other concrete and glass centre of excellence having turned the project down.

"In the end these two agreed only if the shots could be split between them," explains Peter, "so that there wouldn't be an absolute identification with one of them."

Their caution was justified. The picture painted of campus life at Lowlands is not a rosy one. It was a showpiece university built in the expansive sixties, but it's shaping up none too well in the paranoid eighties.

The profits-before-people approach to everything from coal mining to health care has not left education unscathed — and the Government axe is swinging ever lower over the soft underbelly of Academe.

"I can only presume that the series is accurate," says Peter knowingly, "because the writer, Andrew Davies, is a university lecturer." Playing Dr Daker is, he admits, rather different from being a vet in "All Creatures Great and Small" — "and the scenery isn't so nice. But I suppose you could call this series the 'All Creatures' of the eighties, just a bit more eccentric and bizarre. "It isn't just a light drama, or even a really black comedy. It is rather satirical, though. As for the way the university is portrayed, I know for certain that it's absolutely right."

Peter's own further education extended only to drama school, which he says now he much preferred to having to put up with the lectures and exams of university life. "Drama school was great — I didn't have to write a word in three years."

His role as Dr Who and Dr Daker have both proved very educational however. "I can move a herd of cows from one side of a field to another," he says proudly, "and I know exactly how to examine someone with appendicitis.

Such wonderfully useful abilities are not the only things Peter has learned along the way, though. His status as one of the previous incarnations of Doctor Who keep him in demand with fans of the science fiction series, especially in America.

"I was very naive about such thing in the early days," he confesses. "They would ring me up and offer to pay the air fare and hotel bills to go to a Dr Who convention in the States and I'd jump at the chance. But I would end up working solidly for five days, with endless autographs and personal appearances — and all for nothing. Nowadays I make sure that things work out a little better."