A family affair at Yannathan 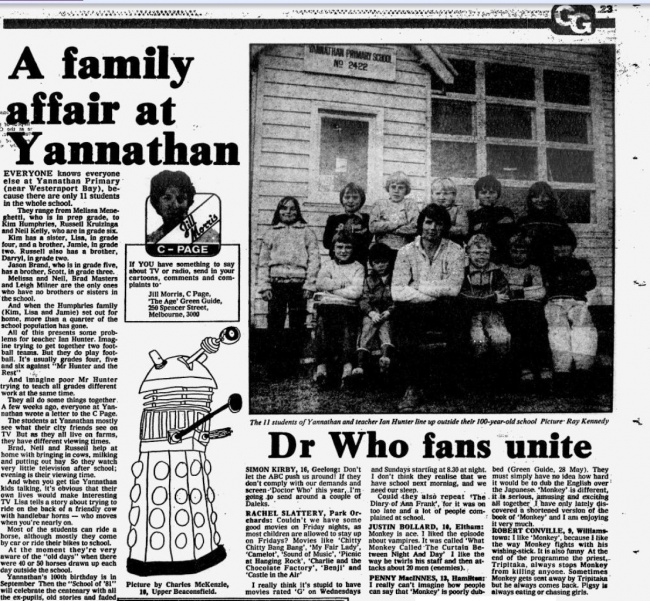 EVERYONE knows everyone else at Yannathan Primary (near Westernport Bay), because there are only 11 students in the whole school.

They range from Melissa Meneghetti, who is in prep grade, to Kim Humphries, Russell Krulzinga and Neil Kelly, who are in grade six. Kim has a sister. Lisa, In grade four, and a brother, Jamie, In grade two. Russell also has a brother, Darryl, in grade two.

Jason Brand, who is in grade five, has a brother, Scott, in grade three.

Melissa and Nell, Brad Masters and Leigh Milner are the only ones who have no brothers or sisters in the school.

And when the Humphries family (Kim, Lisa and Jamie) set out for home, more than a quarter of the school population has gone.

All of this presents some problems for teacher Ian Hunter. Imagine trying to get together two football teams. But they do play football. It's usually grades four, five and six against "Mr Hunter and the Rest"

And Imagine poor Mr Hunter trying to teach all grades different work at the same time.

They all do some things together. A few weeks ago, everyone at Yannathan wrote a letter to the C Page. The students at Yannathan mostly see what their city friends see on TV But as they all live on farms, they have different viewing times. Brad, Nell and Russell help at home with bringing In cows, milking and putting out hay So they watch very little television after school: evening Is their viewing time.

And when you get the Yannathan kids talking, It's obvious that their own lives would make interesting TV Lisa tells a story about trying to ride on the back of a friendly cow with handlebar horns — who moves when you're nearly on.

Most of the students can ride a horse, although mostly they come by car or ride their bikes to school. At the moment they're very aware of the "old days" when there were 10 or 50 horses drawn up each day outside the school.

Yannathun's 100th birthday is in September. Then the "School of '81" will celebrate the centenary with all the ex-pupils, old stories and faded photographs they can find.

SIMON KIRBY, I6, Geelong: Don't let the ABC push us around! If they don't comply with our demands and screen Doctor Who this year, I'm going 40 send around a couple of Daleks.

RACHEL SLATTERY, Park Orchards: Couldn't we have some good movies on Friday nights, as most children are allowed to stay up on Fridays? Movies like 'Chitty Chitty Bang Bang', 'My Fair Lady', 'Camelot', 'Sound of Music', 'Picnic at Hanging Rock', 'Charlie and the Chocolate Factory', 'Benji and 'Castle In the Air'

I really think it's stupid to have movies rated 'G' on Wednesdays and Sundays starting at 8.30 at night. I don't think they realise that we have school next morning, and we need our sleep.

Could they also repeat 'The Diary of Ann Frank', for it was on too late and a lot of people complained at school.

JUSTIN BOLLARD, 10, Eithana: Monkey is ace. I liked the episode about vampires. It was called 'What Monkey Called The Curtain Between Night And Day' I like the way he twirls his staff and then attacks about 20 men (enemies).

PENNY MaciNNES, 13, Hamilton: I really can't Imagine how people can say that 'Monkey' is poorly dubbed (Green Guide. 28 May). They must simply have no Idea how hard it would be to dub the English over the Japanese. 'Monkey' is different, it is serious, amusing and exciting alt together I have only lately discovered a shortened version of the book of 'Monkey' and I am enjoying it very much.

ROBERT CONYILLE, 8, Williamstown: I like 'Monkey', because I like the way Monkey fights with his wishing-stick. It Is also funny At the end of the programme the priest, Tripitaka, always stops Monkey from killing anyone. Sometimes Monkey gets sent away by Trantalta but be always conies back. Pigsy is always eating or chasing girls.

If YOU have something to say about TV or radio, send in your cartoons, comments and complaints to'

Caption: The 11 students of Yannathan and teacher Ian Hunter line up outside their 100-year-old school Picture- Ray Kennedy