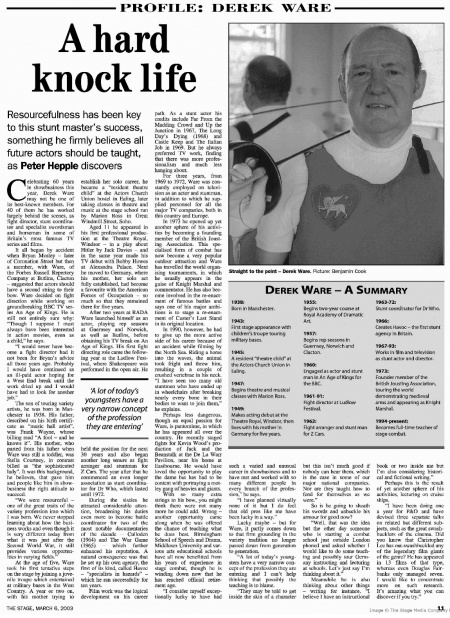 Resourcefulness has been key to this stunt master's success, something he firmly believes all future actors should be taught, as Peter Hepple discovers

Celebrating 60 years in showbusiness this year, Derek Ware may not be one of its best-known members. For 40 of them he has worked largely behind the scenes, as fight director, stunt coordinator and specialist swordsman and horseman in some of Britain's most famous TV series and films.

It all began by accident when Bryan Mosley - later of Coronation Street but then a member, with Ware, of the Forbes Russell Repertory Company at Butlins, Clacton - suggested that actors should have a second string to their bow. Ware decided on fight direction while working on groundbreaking BBC TV series An Age of Kings. He is still not entirely sure why: "Though I suppose I must always have been interested in action movies, even as a child," he says.

"I would never have become a fight director had it not been for Bryan's advice all those years ago. Probably I would have continued as an ill-paid actor hoping for a West End break until the work dried up and 1 would have had to look for another job."

The son of touring variety artists, he was born in Manchester in 1938. His father, described on his birth certificate as "music hall artist", was Frank Wayne, whose billing read "A fool - and he knows it". His mother, who parted from his father when Ware was still a toddler, was Stella Courtney, in contrast billed as "the sophisticated lady". It was this background, he believes, that gave him and people like him in show-business the right attitude to succeed.

"We were resourceful one of the great traits of the variety profession into which I was born. We never stopped learning about how the business works and even though it is very different today from what it was just after the Second World War, it still provides various opportunities in varying fields."

At the age of five, Ware took his first tentative steps on the stage by joining a juvenile troupe which entertained at military bases in the West Country. A year or two on, with his mother trying to establish her solo career, he became a "resident theatre child" at the Actors Church Union hostel in Ealing, later taking classes in theatre and music at the stage school run by Marion Ross in Great Windmill Street, Soho.

Aged 11 he appeared in his first professional production at the Theatre Royal, Windsor - in a play about Hitler by Jack Davies - and in the same year made his TV debut with Bobby Howes at Alexandra Palace. Next he moved to Germany, where his mother, her solo act fully established, had become a favourite with the American Forces of Occupation - so much so that they remained there for five years.

After two years at RADA Ware launched himself as an actor, playing rep seasons at Guernsey and Norwich, as well as Butlins, before obtaining his TV break on An Age of Kings. His first fight directing role came the following year at the Ludlow Festival, where Shakespeare was performed in the open air. He held the position for the next 30 years and also began another long tenure as fight arranger and stuntman for Z Cars. The year after that he commenced an even longer association as stunt coordinator for Dr Who, which lasted until 1972.

During the sixties he attracted considerable attention, broadening his duties even more to become battle coordinator for two of the most notable documentaries of the decade - Culloden (1964) and The War Game (1965) - which further enhanced his reputation. A natural consequence was that he set up his own agency, the first of its kind, called Havoc - "specialists in hazards" which he ran successfully for ten years.

Film work was the logical development on his career path. As a stunt actor his credits include Far From the Madding Crowd and Up the Junction in 1967, The Long Day's Dying (1968) and Castle Keep and The Italian Job in 1969. But he always preferred TV work, finding that there was more professionalism and much less hanging about.

For three years, from 1969 to 1972, Ware was constantly employed on television as an actor and stuntman, in addition to which he supplied personnel for all the major TV companies, both in this country and Europe.

In 1973 he opened up yet another sphere of his activities by becoming a founding member of the British Jousting Association. This specialised form of combat has now become a very popular outdoor attraction and Ware has travelled the world organising tournaments, in which he usually appears in the guise of Knight Marshal and commentator. He has also become involved in the re-enactment of famous battles and says one of his major ambitions is to stage a re-enactment of Custer's Last Stand in its original location.

In 1990, however, he had to give up the more active side of his career because of an accident while filming by the North Sea. Riding a horse into the waves, the animal took fright and threw him resulting in a couple of crushed vertebrae in his neck. "I have seen too many old stuntmen who have ended up in wheelchairs after breaking nearly every bone in their bodies to want to join them," he explains,

Perhaps less dangerous, though an equal passion for Ware, is pantomime, in which he has appeared all over the country. He recently staged fights for Kevin Wood's production of Jack and the Beanstalk at the De La Warr Pavilion, near his home at Eastbourne. He would have loved the opportunity to play the dame but has had to be content with portraying a motley gang of heavies and giants.

With so many extra strings to his bow, you might think there were not many more he could add. Wrong another opportunity came along when he was offered the chance of teaching what he does best. Birmingham School of Speech and Drama, Middlesex University and various arts educational schools have all now benefitted from his years of experience in stage combat, though he is winding down now that he has reached official retirement age.

"I consider myself exceptionally lucky to have had such a varied and unusual career in showbusiness and to have met and worked with so many different people in every branch of the profession," he says.

"I have planned virtually none of it but I do feel that old pros like me have been lucky in a way."

Lucky maybe - but for Ware, it partly comes down to that firm grounding in the variety tradition no longer passed down from generation to generation.

"A lot of today's youngsters have a very narrow concept of the profession they are entering and I can't help thinking that possibly the teaching is to blame.

"They may be told to get inside the skin of a character but this isn't much good if nobody can hear them, which is the case in some of our major national companies. Nor are they taught how to fend for themselves as we were."

So is he going to sheath his swords and unbuckle his armour for good now?

"Well, that was the idea but the other day someone who is starting a combat school just outside London phoned and asked whether I would like to do some teaching and possibly tour Germany instructing and lecturing at schools. Let's just say I'm thinking about it."

Meanwhile he is also thinking about other things - writing for instance. "I believe I have an instructional book or two inside me but I'm also considering historical and fictional writing."

Perhaps this is the result of yet another sphere of his activities, lecturing on cruise ships.

"I have been doing one a year for P&O and have devised three separate talks on related but different subjects, such as the great swashbucklers of the cinema. Did you know that Christopher Lee has out-swashbuckled any of the legendary film giants of the genre? He has appeared in 13 films of that type, whereas even Douglas Fairbanks only managed seven. I would like to concentrate more on such research. It's amazing what you can discover if you try."

1945: A resident "theatre child" at the Actors Church Union in Ealing.

1949: Makes acting debut at the Theatre Royal, Windsor, then lives with his mother in Germany for five years.

1960: Engaged as actor and stunt man in An Age of Kings for the BBC.

1967-93: Works in film and television as stunt actor and director.