A salute to sci-fi's Dr. Who 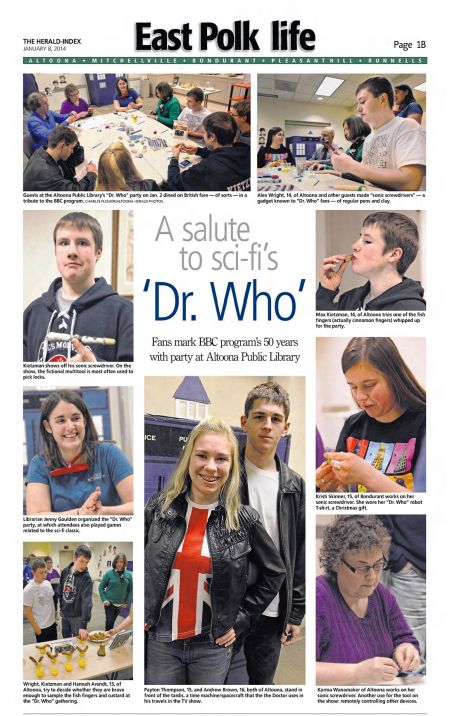 Guests at the Altoona Public Library's "Dr. Who" party on Jan. 2 dined on British fare — of sorts — in a tribute to the BBC program.

Alex Wright, 14, of Altoona and other guests made "sonic screwdrivers" — a gadget known to "Dr. Who fans — of regular pens and clay.

Max Kietzman, 14, of Altoona tries one of the fish fingers (actually cinnamon fingers) whipped up for the party.

Karma Wanamaker of Altoona works on her sonic screwdriver. Another use for the tool on the show: remotely controlling other devices.

Kietzman shows off his sonic screwdriver. On the show, the fictional multitool is most often used to pick locks.

Librarian Jenny Goulden organized the "Dr. Who" party, at which attendees also played games related to the sci-fi classic.

Wright, Kietzman and Hannah Arendt, 13, of Altoona, try to decide whether they are brave enough to sample the fish fingers and custard at the "Dr. Who gathering.

Payton Thompson, 15, and Andrew Brown, 16, both of Altoona, stand in front of the tardis, a time machine/spacecraft that the the Doctor uses in his travels in the TV show.

Kristi Skinner, 15, of Bondurant works on her sonic screwdriver. She wore her "Dr. Who robot T-shirt, a Christmas gift.