Actor's tears as she bows out of Doctor Who 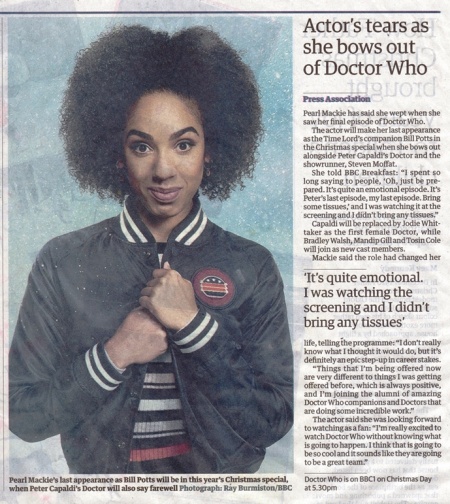 Pearl Mackie has said she wept when she saw her final episode of Doctor Who.

The actor will make her last appearance as the Time Lord's companion Bill Potts in the Christmas special when she bows out alongside Peter Capaldi's Doctor and the showrunner, Steven Moffat.

She told BBC Breakfast: "I spent so long saying to people, 'Oh, just be prepared. It's quite an emotional episode. It's Peter's last episode, my last episode. Bring some tissues; and I was watching it at the screening and I didn't bring any tissues?'

Capaldi will be replaced by Jodie Whittaker as the first female Doctor, while Bradley Walsh, Mandip Gill and Tosin Cole will join as new cast members.

Mackie said the role had changed her life, telling the programme• "I don't really know what I thought it would do, but it's definitely an epic step-up in career stakes.

"Things that I'm being offered now are very different to things I was getting offered before, which is always positive, and I'm joining the alumni of amazing Doctor Who companions and Doctors that are doing some incredible work?'

Caption: Pearl Mackie's last appearance as Bill Potts will be in this year's Christmas special, Doctor Who is on BBC1 on Christmas Day when Peter Capaldi's Doctor will also say farewell