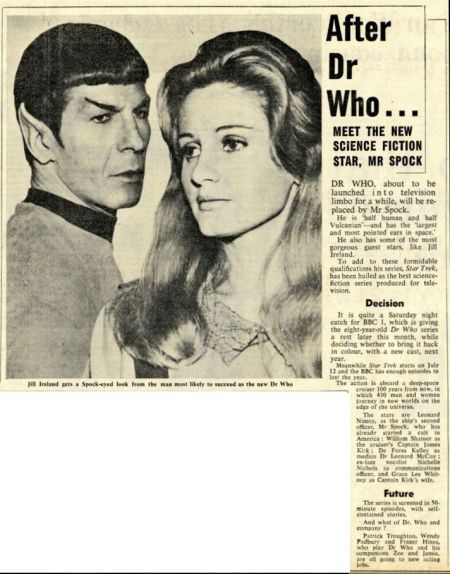 DR WHO, about to he launched into television limbo for a while, will be replaced by Mr Spock.

He is 'half human and half Vulcanian'—and has the 'largest and most pointed cats in space.'

He also has some of the most gorgeous guest stars, like Jill Ireland.

To add to these formidable qualifications his series, Star Trek, has been hailed as the best science fiction series produced for television.

It is quite a Saturday night catch for BBC 1, which is giving the eight-year-old Dr Who series a rest later this month, while deciding whether to bring it back in colour, with a new cast, next year.

Meanwhile Star Trek starts on July 12 and the BBC has enough episodes to last the year.

The action is aboard a deep-space cruiser 100 year, from now, in which 430 men and women journey in new worlds on the edge of the universe.

The series it screened in 50-minute episodes, with self-contained stories.

And what of Dr. Who and company ?

Patrick Troughton, Wendy Padbury and Frazer Hines, who play Dr Who and his companion, Zoe and Jamie, are all going to new acting jobs.

Caption: Jill Ireland gets a Spock-eyed look from the man most likely to succeed as the new Dr Who