After all this time, our hero is seen off by a Womble 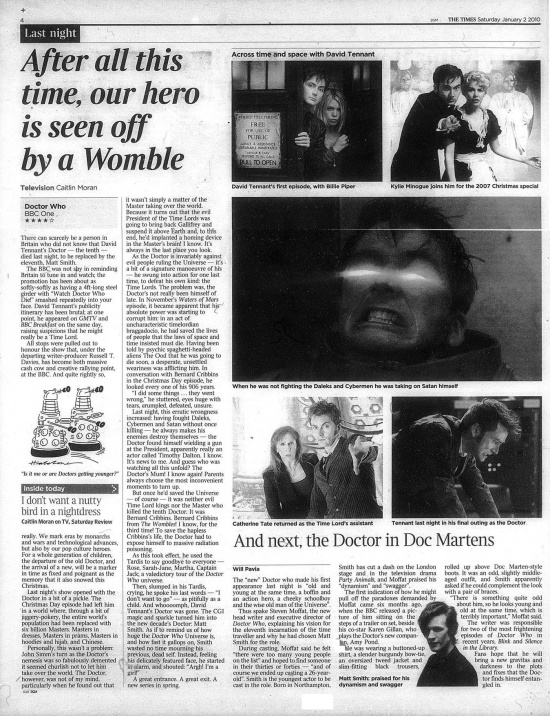 There can scarcely be a person in Britain who did not know that David Tenant's Doctor — the tenth —died last night, to be replaced by the eleventh, Matt Smith.

The BBC was not shy in reminding Britain to tune in and watch; the promotion has been about as softly-softly as having a 4ft-long steel girder with "Watch Doctor Who Die!" smashed repeatedly into your face. David Tennant's publicity itinerary has been brutal; at one point, he appeared on GMTV and BBC Breakfast on the same day, raising suspicions that he might really be a Time Lord.

All stops were pulled out to honour the show that, under the departing writer-producer Russell T. Davies, has become both massive cash cow and creative rallying point, at the BBC. And quite rightly so, really. We mark eras by monarchs and wars and technological advances, but also by our pop culture heroes. For a whole generation of children, the departure of the old Doctor, and the arrival of a new, will be a marker in time as fixed and poignant as the memory that it also snowed this Christmas.

Last night's show opened with the Doctor in a bit of a pickle. The Christmas Day episode had left him -in a world where, through a bit of jiggery-pokery, the entire world's population had been replaced with six billion Masters. Masters in dresses, Masters in prams, Masters in hoodies and hijab, and Chinese.

Personally, this wasn't a problem: John Simm's turn as the Doctor's nemesis was so fabulously demented it seemed churlish not to let him take over the world. The Doctor, however, was not of my mind, particularly when he found out that it wasn't simply a matter of the Master taking over the world. Because it turns out that the evil President of the Time Lords was going to bring back Gallifrey and suspend it above Earth and, to this end, he'd implanted a homing device in the Master's brain! I know. It's always in the last place you look.

As the Doctor is invariably against evil people ruling the Universe — it's a bit of a signature manoeuvre of his — he swung into action for one last time, to defeat his own kind: the Time Lords. The problem was, the Doctor's not really been himself of late. In November's Waters of Mars episode, it became apparent that hr absolute power was starting to corrupt him: in an act of uncharacteristic timelordian braggadocio, he had saved the lives of people that the laws of space and time insisted must die. Having been told by psychic spaghetti-headed aliens The Ood that he was going to die soon, a desperate, unsettled weariness was afflicting him. In conversation with Bernard Cribbins in the Christmas Day episode, he looked every one of his 906 years.

"I did some things ... they went wrong," he stuttered, eyes huge with tears, crumpled, defeated, unsure.

Last night, this erratic wrongness increased: having fought Daleks, Cybermen and Satan without once killing — he always makes his enemies destroy themselves — the Doctor found himself wielding a gun at the President, apparently really an actor called Timothy Dalton. I know. It's news to me. And guess who was watching all this unfold? The Doctor's Mum! I know again! Parents always choose the most inconvenient moments to turn up.

But once he'd saved the Universe — of course — it was neither evil Time Lord kings nor the Master who killed the tenth Doctor. It was Bernard Cribbins. Bernard Cribbins from The Wombles! I know, for the third time! To save the hapless Cribbins's life, the Doctor had to expose himself to massive radiation poisoning.

As this took effect, Ile used the Tardis to say goodbye to everyone —Rose, Sarah-Jane, Martha, Captain Jack; a valedictory tour of the Doctor Who universe.

Then, slumped in his Tardis, crying, he spoke his last words — "I don't want to go" — as pitifully as a child. And whoooomph, David Tennant's Doctor was gone. The CGI magic and sparkle turned him into the new decade's Doctor. Matt Smith. As if to remind us of how huge the Doctor Who Universe is, and how fast it gallops on, Smith wasted no time mourning his previous, dead self. Instead, feeling his delicately featured face, he started in alarm, and shouted: "Argh! I'm a girl!"

A great entrance. A great exit. A new series in spring.

And next, the Doctor in Doc Martens

The "new" Doctor who made his first appearance last night is "old and young at the same time, a boffin and an action hero, a cheeky schoolboy and the wise old man of the Universe".

Thus spake Steven Moffat, the new head writer and executive director of Doctor Who, explaining his vision for the eleventh incarnation of the time traveller and why he had chosen Matt Smith for the role.

During casting, Moffat said he felt "there were too many young people on the list" and hoped to find someone in their thirties or forties — "and of course we ended up casting a 26-year-old". Smith is the youngest actor to be cast in the role. Born in Northampton, Smith has cut a dash on the London stage and, in the television drama Party Animals, and Moffat praised his "dynamism" and "swagger".

The first indication of how he might pull off the paradoxes demanded by Moffat came six months ago, when the BBC released a picture of him sitting on the steps of a trailer on set, beside his co-star Karen Gillan, who lays the Doctor's new companion, Amy Pond.

He was wearing a buttoned-up shirt, a slender burgundy bow-tie, an oversized tweed jacket and slim-fitting black trousers, rolled up above Doc Marten-style boots. It was an odd, slightly middle-aged outfit, and Smith apparently asked if he could complement the look with a pair of braces.

"There is something quite odd about him, so he looks young and old at the same time; which is terribly important," Moffat said. The writer was responsible for two of the most frightening episodes of Doctor Who in recent years, Blink and Silence in the Library.

Fans hope that he will bring a new gravitas and darkness to the plots and fixes that the Doctor finds himself entangled in.

Comic: Is it me or are Doctors getting younger?"

Across time and space with David Tennant

Kylie Minogue Joins him for the 2007 Christmas special

Tennant last night in his final outing as the Doctor.

Matt Smith: praised for his dynamism and swagger