Ahead of her time ... academics find space for woman who made Doctor Who theme 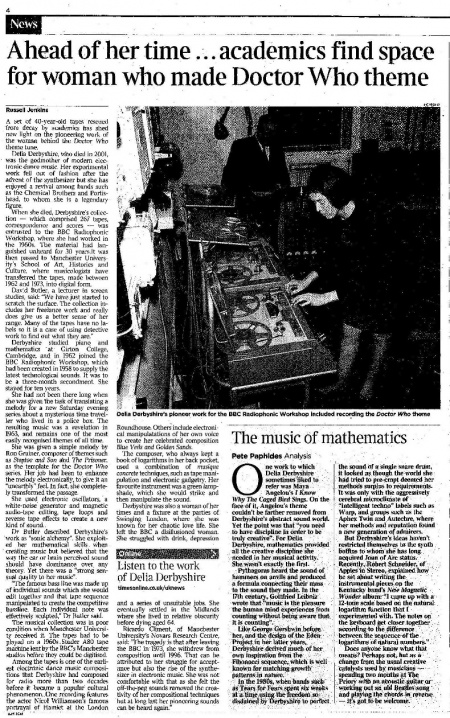 A set of 40-year-old tapes rescued from decay by academics has shed new light on the pioneering work of the woman behind the Doctor Who theme tune.

Delia Derbyshire, who died in 2001, was the godmother of modern electronic dance music. Her experimental work fell out of fashion after the advent of the synthesizer but she has enjoyed a revival among bands such as the Chemical Brothers and Portis-head, to whom she is a legendary figure.

When she died, Derbyshire's collection — which comprised 267 tapes, correspondence and scores -- was entrusted to the BBC Radiophonic Workshop, where she had worked in the 1960s. The material had languished unheard for 30 years. it was then passed to Manchester University's School of Art, Histories and Culture, where musicologists have transferred the tapes, made between 1962 and 1973, into digital form.

David Butler, a lecturer in screen studies, said: "We have just started to scratch the surface. The collection includes her freelance work and really does give us a better sense" of her range. Many of the tapes have no labels so it is a case of using detective work to find out what they are." Derbyshire studied piano and mathematics at Girton College, Cambridge, and in 1962 joined the BBC Radiophonic Workshop, which had been created in 1958 to supply the latest technological sounds. It was to be a three-month secondment. She stayed for ten years.

She had not been there long when she was given the task of translating a melody for a new Saturday evening series about a mysterious time traveller who lived in a police box. The resulting music was a revelation in 1963, and remains one of the most easily recognised themes of all time. She was given a simple melody by Ron Grainer, composer of themes such as Steptoe and San and The Prisoner, as the template for the Doctor Who series. Her job had been to enhance the melody electronically, to give it an "unearthly" feel. In fact, she completely transformed the passage.

Dr Butler described Derbyshire's work as "sonic alchemy". She exploited her mathematical skills when creating music but believed that the way the ear or brain perceived sound should have dominance over any theory. Yet there was a "strong sensual quality to her music".

"The famous bass line was made up of individual sounds which she would edit together and that tape sequence manipulated to create the competitive bassline. Each individual note was effectively sculpted," Dr Butler said.

The musical collection was in poor condition when Manchester University received it. The tapes had to be played on a 1960s Studer A80 tape machine lent by the BBC's Manchester studios before they could be digitised Among the tapes is one of the earliest electronic dance music compositions that Derbyshire had composed for radio more than two decades before it became a popular cultural phenomenon. One recording features the actor Nicol Williamson's famous portrayal of Hamlet at the London Roundhouse. Others include electronical manipulatations of her own voice to create her celebrated composition Blue Veils and Golden Sands.

The composer, who always kept a book of logarithms in her back pocket, used a combination of musique concrete techniques, such as tape manipulation and electronic gadgetry. Her favourite instrument was a green lampshade, which she would strike and then manipulate the sound.

Derbyshire was also a woman of her times and a fixture at the parties of Swinging London, where she was known for her chaotic love life. She left the BBC a disillusioned woman. She struggled with drink, depression and a series of unsuitable jobs. She eventually settled in the Midlands where she lived in relative obscurity before dying aged 64.

Ricardo Climent, of Manchester University's Novars Research Centre, said: "The tragedy is that after leaving the BBC in 1973, she withdrew from composition until 1996. That can he attributed to her struggle for acceptance but also the rise of the synthesizer in electronic music. She-was not comfortable with that as she felt the off-the-peg sounds removed the creativity of her compositional techniques but at long last her pioneering sounds can be heard again.

One work to which Delia Derbyshire sometimes liked to refer was Maya Angelou's I Know Why The Caged Bird Sings. On the face of it, Angelou's theme couldn't be farther removed from Derbyshire's abstract sound world. Yet the point was that "you need to have discipline in order to he truly creative". For Delia Derbyshire, mathematics provided all the creative discipline she needed in her musical activity.

She wasn't exactly the first. Pythagoras heard the sound of hammers on anvils and produced a formula connecting their mass to the sound they made. In the 17th century, Gottfried Leibniz wrote that "music Is the pleasure the human mind experiences from counting without being aware that it is counting".

Like George Gershwin before her, and the design of the Eden Project in her latter years, Derbyshire derived much of her own inspiration from the Fibonacci sequence, which is well known for matching growth patterns in nature.

In the 1980s, when bands such as Tears for Fears spent six weeks at a time using the freedom so disdained by Derbyshire to perfect he sound of a single snare drum, it looked as though the world she had tried to pre-empt deemed her methods surplus to requirements. It was only with the aggressively cerebral microclimate of "intelligent techno" labels such as Warp, and groups such as the Aphex Twin and Autechre, where her methods and reputation found new generation of admirers.

But Derbyshire's ideas haven't restricted themselves to the synth boffins to whom she has long acquired Joan of Arc status. Recently, Robert Schneider, of Apples in Stereo, explained how to set about writing the instrumental pieces on the Kentucky hand's New Magnetic Wonder album: "I came up with a 2-tone scale based on the natural logarithm function that I experimented with. The notes on the keyboard get closer together according to the difference between the sequence of the logarithms of natural numbers."

Does anyone know what that means? Perhaps not, but as a change from the usual creative catalysts used by musicians spending two months at The Priory with an acoustic guitar or sorting out an old Beatles song and playing the chords in reverse — it's got to be welcome.