Ahhhh, what a time had at 'Doctor Who' festival 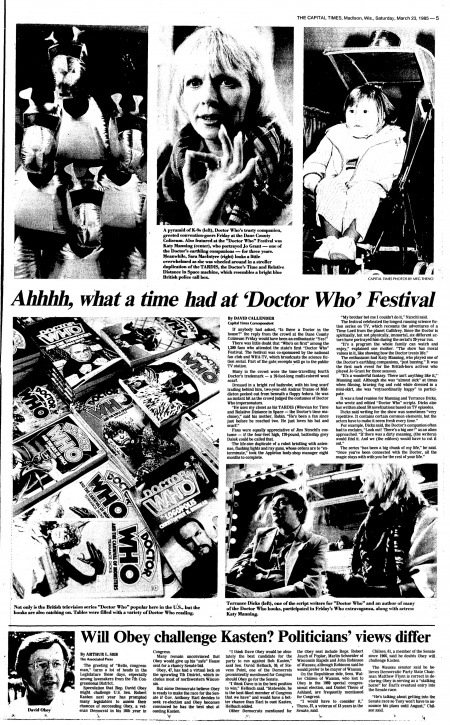 If anybody had asked, "Is there a Doctor in the house?" the reply from the crowd at the Dane County Coliseum Friday would have been an enthusiastic "Yes!" There was little doubt that "Who's on first" among the 1,300 fans who attended the state's first "Doctor Who" Festival. The festival was co-sponsored by the national fan club and WHA-TV, which broadcasts the science fiction serial. Part of the gate receipts will go to the public TV station.

Many in the crowd wore the time-travelling fourth Doctor's trademark — a 20-foot-long multi-colored wool scarf.

Dressed in a bright red bathrobe, with his long scarf trailing behind him, two-year-old Andras Transo of Middleton peeked out from beneath a floppy fedora. He was an instant hit as the crowd judged the costumes of Doctor Who impersonators. "He uses my closet as his TARDIS (Whovian for Time and Relative Distance in Space — the Doctor's time machine)," said his mother, Robin. "He's been a fan since just before he reached two. He just loves his hat and scarf." Fans were equally appreciative of Jim Nirschl's costume — if the four-feet high, 170 pound, battleship grey Dalek could be called that.

The life-size duplicate of a robot bristling with antennae, flashing lights and ray guns, whose orders are to "exterminate," took the Appleton body-shop manager eight months to complete.

"My brother bet me I couldn't do it," Nirschl said.

The festival celebrated the longest running science fiction series on TV, which recounts the adventures of a Time Lord from the planet Gallifrey. Since the Doctor is spiritually, but not physically, immortal, six different actors have portrayed him during the serial's 20-year run.

"It's a program the whole family can watch and enjoy," explained one mother.

"The show has moral values in it, like showing how the Doctor treats life." The enthusiasm had Katy Manning, who played one of the Doctor's earthling companions, "just buzzing." It was the first such event for the British-born actress who played Jo Grant for three seasons.

"It's a wonderful fantasy. There isn't anything like it," Manning said. Although she was "almost sick" at times when filming, braving fog and cold while dressed in a mini-skirt, she was "extraordinarily happy" to participate.

It was a fond reunion for Manning and Terrance Dicks, who wrote and edited "Doctor Who" scripts. Dicks also has written about 50 novelizations based on TV episodes.

Dicks said writing for the show was sometimes "very repetitive. It contains certain common elements, but the actors have to make it seem fresh every time."

For example, Dicks said, the Doctor's companion often had to exclaim, "Look out! There's a big one!" as an alien approached. "If there was a dirty meaning, (the writers) would find it. And we (the editors) would have to cut it out."

The series "has been a big chunk of my life," he' said "Once you've been connected with the Doctor, all the magic stays with with you for the rest of your life." Caption: A pyramid of K-9s (left), Doctor Who's trusty companion, greeted convention-goers Friday at the Dane County Coliseum. Also featured at the "Doctor Who" Festival was Katy Manning (center), who portrayed J0 Grant —- one of the Doctor's earthling companions — for three years. Meanwhile, Sara MacIntyre (right) looks a little overwhelmed as she was wheeled around in a stroller duplication of the TARDIS, the Doctor's Time and Relative Distance in Space machine, which resembles a bright blue British police call box. Caption: Not only is the British television series "Doctor Who" popular here in the U.S., but the books are also catching on. Tables were filled with a variety of Doctor Who reading.

Caption: Terrance Dicks (left), one of the script writers for "Doctor Who" and an author of many of the "Doctor Who" books, participated in Friday's Who extravaganza, along with actress Katy Manning.