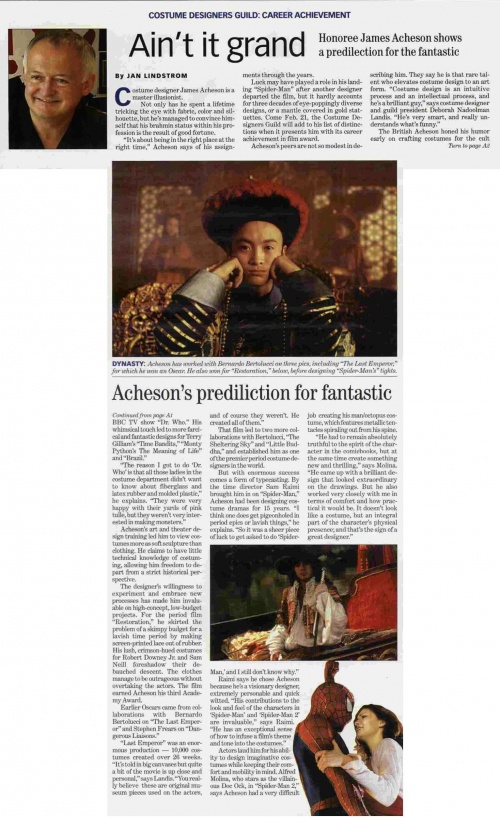 Honoree James Acheson shows a predilection for the fantastic

Costume designer James Acheson is a master illusionist. Not only has he spent a lifetime tricking the eye with fabric, color and silhouette, but he's managed to convince himself that his brahmin status within his profession is the result of good fortune.

"It's about being in the right place at the right time," Acheson says of his as.signments through the years.

Luck may have played a role in his landing "Spider-Man" after another designer departed the film, but it hardly accounts for three decades of eye-poppingly diverse designs, or a mantle covered in gold statuettes. Come Feb. 21, the Costume Designers Guild will add to his list of distinctions when it presents him with its career achievement in film award.

Acheson's peers are not so modestin de scribing him. They say he is that rare talent who elevates costume design to an art form. "Costume design is an intuitive process and an intellectual process, and he's a brilliant guy," says costume designer and guild president Deborah Nadoolman Landis. "He's very smart, and really understands what's funny."

The British Acheson honed his humor early on crafting costumes for the cult BBC TV show "Dr. Who." His whimsical touch led to morefarci-cal and fantastic designs for Terry Gilliam's "Time Bandits," "Monty Python's The Meaning of Life" and "Brazil."

"The reason I got to do Dr. Who' is that all those ladies in the costume department didn't want to know about fiberglass and latex rubber and molded plastic," he explains. "They were very happy with their yards of pink tulle, but they weren't very interested in making monsters."

Acheson's art and theater design training led him to view costumes more as soft sculpture than clothing. He claims to have little technical knowledge of costuming, allowing him freedom to depart from a strict historical perspective.

The designer's willingness to experiment and embrace new processes has made him invaluable on high-concept, low-budget projects. For the period film "Restoration," he skirted the problem of a skimpy budget for a lavish time period by making screen-printed lace out of rubber. His lush, crimson-hued costumes for Robert Downey Jr. and Sam Neill foreshadow their de-bandied descent. The clothes manage to be outrageous without overtaking the actors. The filn earned Acheson his third Academy Award.

Earlier Oscars came from collaborations with Bernardo Bertolucci on "The Last Emperor" And Stephen Frears on "Dangerous Liaisons."

"Last Emperor" was an enormous production — 10,000 costumes created over 26 weeks. "It's told in big canvases but quite a bit of the movie is up close and personal," says Landis. "You really believe these are original museum pieces used on the actors, and of course they weren't. He created all of them."

That film led to two more collaborations with Bertolucci, "The Sheltering Sky" and "Little Buddha," and established him as one of the premier period costume designers inthe world.

But with enormous success comes a form of typecasting. By the time director Sam Rairni brought him in on "Spider-Man," Acheson had been designing costume dramas for 15 years. "1 think one does get pigeonholed in period epics or lavish things," he explains. "So it was a sheer piece of luck to get asked to do 'Spider Man,' and I still don't know why."

Raimi says he chose Acheson because he's a visionary designer; extremely personable and quick witted. "His contributions to the look and feel of the characters in 'Spider-Man' and Spider-Man 2' are invaluable," says Raimi. "He has an exceptional sense of how to infuse a film's theme and tone into the costumes."

Actors laud him for his ability todesign imaginative costumes while keeping their comfort and mobility in mind. Alfred Molina, who stars as the villainous Doc Ock, in "Spider-Man 2," says Acheson had a very difficult job creating his man/octopus costume, which features metallic tentacles spiraling out from his spine.

"He had to remain absolutely truthful to the spirit of the character in the comicbooks, but at the same time create something new and thrilling," says Molina. "He came up with a brilliant design that looked extraordinary on the drawings. But he also worked very closely with me in terms of comfort and how practical it would be. It doesn't look like a costume, but an integral part of the character's physical presence; and that's the sign of a great designer."

Caption: DYNASTY: Acheson has worked with Bernardo Bertolucci on three pics, including "The Last Emperor," for which he won an Oscar. He also won for "Restoration," below, before designing "Spider-Man's" tights.