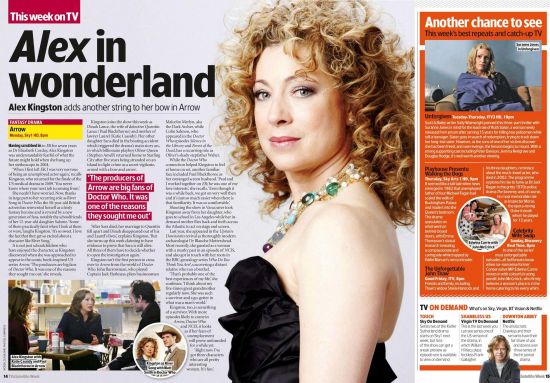 Alex Kingston adds another string to her bow in Arrow

Having scrubbed in to ER for seven years as Dr Elizabeth Corday, Alex Kingston was understandably fearful of what the future might hold when she hung up her stethoscope in 2004.

'When I first left ER, I was very nervous of being an unemployed actor again, recalls Kingston, who returned for the finale of the US medical drama in 2009. 'You never know where your next job is coming from.'

She needn't have worried. Now, thanks in large part to her recurring role as River Song in Doctor Who, the 50-year-old British actress has reinvented herself as a feisty fantasy heroine and is revered by a new generation of fans, notably the schoolfriends of her 12-year-old daughter Salome. 'Some of them practically faint when I look at them or wave, laughs Kingston. 'It's so sweet. I love the fact that they get so excited about a character like River Song.'

It is not just schoolchildren who have enjoyed the character, as Kingston discovered when she was approached to appear in the comic book-inspired US series Arrow. 'The producers are big fans of Doctor Who. It was one of the reasons they sought me out,' she reveals.

Kingston joins the show this week as Dinah Lance, the wife of detective Quentin Lance (Paul Blackthorne) and mother of lawyer Laurel (Katie Cassidy). Her other daughter Sara died in the boating accident which triggered the drama's main story arc, in which billionaire playboy Oliver Queen (Stephen Amell) returned home to Starling City after five years being stranded on an island to fight crime as a secret vigilante, armed with a bow and arrow.

'After Sara died, her marriage to Quentin fell apart and Dinah disappeared out of his and Laurel's lives; explains Kingston. 'But she turns up this week claiming to have evidence to prove that Sara is still alive. All three of them have to decide whether to open the investigation again.'

Kingston isn't the first person to cross over to Arrow from the world of Doctor Who. John Barrowman, who played Captain Jack Harkness, plays businessman Malcolm Merlyn, aka the Dark Archer, while Colin Salmon, who appeared in the Doctor Who episodes Silence in the Library and Forest of the Dead, has a recurring role as Oliver's shady stepfather Walter. While the Doctor Who connection helped Kingston to feel at home on set, another familiar face included Paul Blackthorne as her estranged screen husband. 'Paul and I worked together on ER; he was one of my love interests, she recalls. 'Even though it was a while back, we got on very well then and it's just so much easier when there is that familiarity. It was so comfortable.'

Shooting the show in Vancouver took Kingston away from her daughter, who goes to school in Los Angeles while her in-demand mother flies back and forth across the Atlantic to act on stage and screen.

Last year, she appeared in the Upstairs Downstairs revival as thoroughly modern archaeologist Dr Blanche Mottershead. Most recently, she guested as a woman with a murky past in an episode of NCIS, and also got in touch with her roots in the BBC genealogy series Who Do You Think You Are?, uncovering a distant relative who ran a brothel.

'That's probably one of the best experiences of my life, she confesses. 'I think about my five-times great grandmother regularly now. She was such a survivor and a go-getter in what was a man's world.'

Kingston, too, is something of a survivor. With more episodes likely to come in Arrow, Doctor Who and NCIS, it looks as if her fears of unemployment will prove unfounded for a while yet.

'Right now I've got three characters who are all pretty interesting women. It's fun.'

Caption: Kingston as River Song with Man Smith in Doctor Who