All in good time, the Doctor roars back to take on aliens in wi-fi 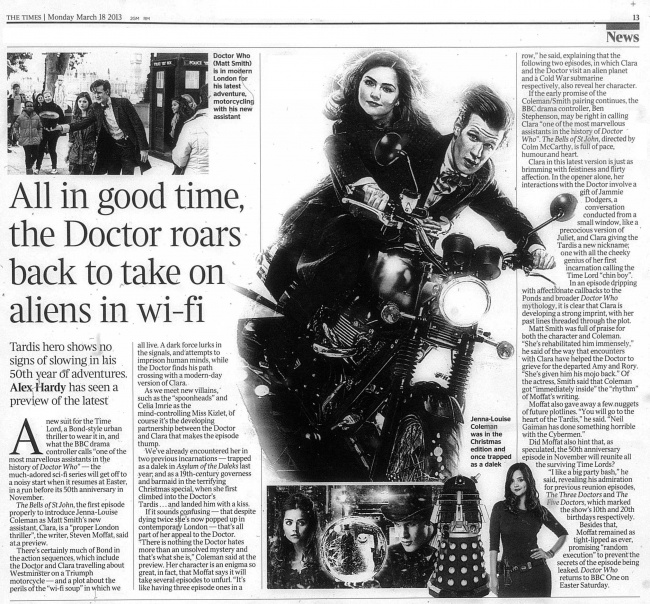 Tardis hero shows no signs of slowing in his 50th year of adventures. Alex Hardy has seen a preview of the latest

A new suit for the Time Lord, a Bond-style urban thriller to wear it in, and what the BBC drama controller calls "one of the most marvellous assistants in the history of Doctor Who" — the much-adored sci-fi series will get off to a noisy start when it resumes at Easter, in a run before its 50th anniversary in November.

The Bells of St John, the first episode properly to introduce Jenna-Louise Coleman as Matt Smith's new assistant, Clara, is a "proper London thriller", the writer, Steven Moffat, said at a preview.

There's certainly much of Bond in the action sequences, which include the Doctor and Clara travelling about Westminster on a Triumph motorcycle— and a plot about the perils of the "wi-fi soup" in which we all live. A dark force lurks in the signals, and attempts to imprison human minds, while the Doctor finds his path crossing with a modern-day version of Clara.

As we meet new villains, such as the "spoonheads" and Celia Imrie as the mind-controlling Miss Kizlet, of course it's the developing partnership between the Doctor and Clara that makes the episode thump.

We've already encountered her in two previous incarnations — trapped as a dalek in Asylum of the Daleks last year, and as a 19th-century governess and barmaid in the terrifying Christmas special, when she first climbed into the Doctor's Tardis ... and landed him with a kiss.

If it sounds fusing— that despite dying twice she's now popped up in contemporary London — that's all part of her appeal to the Doctor. "There is nothing the Doctor hates more than an unsolved mystery and that's what she is," Coleman said at the preview. Her character is an enigma so great, in fact, that Moffat says it will take several episodes to unfurl. "It's like having three episode ones in a row," he said, explaining that the following two episodes, in which Clara and the Doctor visit an alien planet and a Cold War submarine respectively, also reveal her character.

If the early promise of the Coleman/Smith pairing continues, the BBC drama controller, Ben Stephenson, may be right in calling Clara "one of the most marvellous assistants in the history of Doctor - Who". The Bells of St John, directed by Colm McCarthy, is full of pace, humour and heart.

Clara in this latest version is just as brimming with feistiness and flirty affection. In the opener alone, her interactions with the Doctor involve a gift of Jammie Dodgers, a conversation conducted from a small window, like a precocious version of Juliet, and Clara giving the Tardis a new nickname; one with all the cheeky genius of her first incarnation calling the Time Lord "chin boy".

In an episode dripping with affectionate callbacks to the Ponds and broader Doctor Who mythology, it is clear that Clara is developing a strong imprint, with her past lines threaded through the plot Matt Smith was full of praise for both the character and Coleman. "She's rehabilitated him immensely," he said of the way that encounters with Clara have helped the Doctor to grieve for the departed Amy and Rory. "She's given him his mojo back." Of the actress, Smith said that Coleman got "immediately inside" the "rhythm" of Moffat's writing.

Moffat also gave away a few nuggets of future plotlines. "You will go to the heart of the Tardis," he said. "Neil Gaiman has done something horrible with the Cybermen."

Did Moffat also hint that, as speculated, the 50th anniversary episode in November will reunite all the surviving Time Lords? "I like a big party bash," he said, revealing his admiration for previous reunion episodes, The Three Doctors and The Five Doctors, which marked the show's 10th and 20th birthdays respectively.

Besides that, Moffat remained as tight-lipped as ever, promising "random execution" to prevent the secrets of the episode being leaked. Doctor Who returns to BBC One on Easter Saturday.

Caption: Doctor Who (Matt Smith) is in modern London is late for his adventure, motorcycling with his new assistant

Caption: Jenna-Louise Coleman was in the Christmas edition and once trapped as a dalek