An energetic new Doctor is in 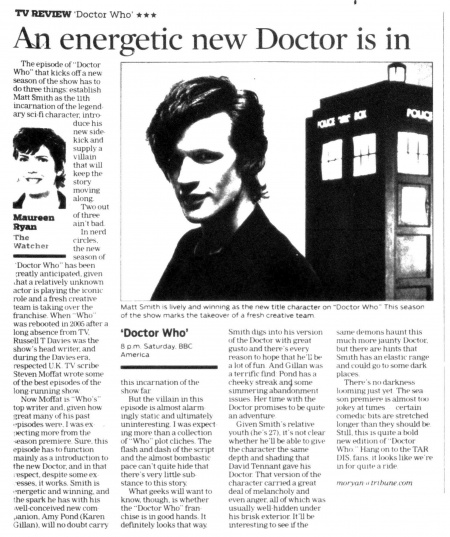 The episode of "Doctor Who" that kicks off a new season of the show has to do three things: establish Matt Smith as the 11th incarnation of the legendary sci-fi character, introduce his new sidekick and supply a villain that will keep the story moving along.

Two out of three ain't bad.

In nerd circles, the new season of "Doctor Who" has been greatly anticipated, given that a relatively unknown actor is playing the iconic role and a fresh creative team is taking over the franchise. When "Who" was rebooted in 2005 after a long absence from TV, Russell T Davies was the show's head writer, and during the Davies era, respected U.K. TV scribe Steven Moffat wrote some of the best episodes of the long-running show.

Now Moffat is "Who's" top writer and, given how great many of his past episodes were, I was expecting more from the season premiere. Sure, this episode has to function mainly as a introduction to the new Doctor, and in that respect, despite some excesses, it works. Smith is energetic and winning, and the spark he has with his well-conceived new companion, Amy Pond (Karen Gillan), will no doubt carry this incarnation of the show far.

But the villain in this episode is almost alarmingly static and ultimately uninteresting. I was expecting more than a collection of "Who" plot cliches. The flash and dash of the script and the almost bombastic pace can't quite hide that there's very little substance to this story.

What geeks will want to know, though, is whether the "Doctor Who" franchise is in good hands. It definitely looks that way. Smith digs into his version of the Doctor with great gusto and there's every reason to hope that he'll be a lot of fun. And Gillan was a terrific find: Pond has a cheeky streak and some simmering abandonment issues. Her time with the Doctor promises to be quite an adventure.

Given Smith's relative youth (he's 27), it's not clear whether he'll be able to give the character the same depth and shading that David Tennant gave his Doctor. That version of the character carried a great deal of melancholy and even anger, all of which was usually well-hidden under his brisk exterior. It'll be interesting to see if the same demons haunt this much more jaunty Doctor, but there are hints that Smith has an elastic range and could go to some dark places.

There's no darkness looming just yet. The season premiere is almost too jokey at times -- certain comedic bits are stretched longer than they should be. Still, this is quite a bold new edition of "Doctor Who." Hang on to the TARDIS, fans, it looks like we're in for quite a ride.