And just look Who turned up 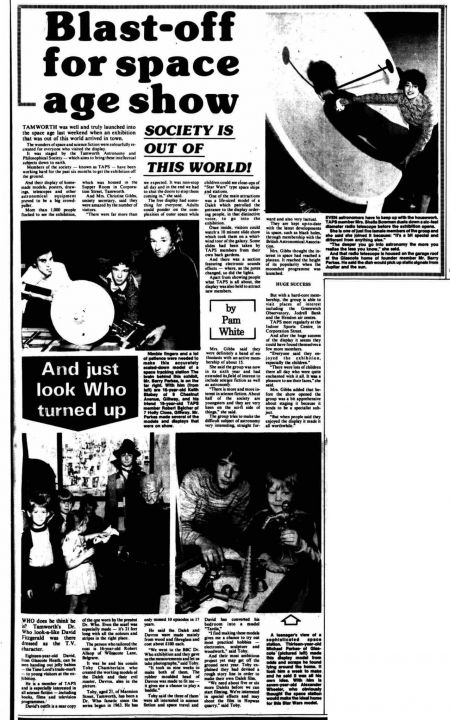 WHO does he think he is? Tamworth's Dr. Who look-a-like David Fitzgerald was there dressed as the T.V. character.

Eighteen year-old David, from Glascote Heath, can be seen handing out jelly babies - the Time Lord's trade-mark - to young visitors at the exhibition.

He is a member of TAPS and is especially interested in all science fiction including books, films and television programmes."

David's outfit is a near copy of the one worn by the present Dr. Who. Even the scarf was especially made - it's 21 feet long with all the colours and stripes in the right place.

The person who tailored the coat is 16-year-old Robert Allsop of Wilnecote Lane, Belgrave.

It was he and his cousin Toby Chamberlain who created the working models of the Dalek and their evil master, Davros, also in the picture.

He said the Dalek and Davros were made mainly from wood and fibreglass and cost about £100 each.

"We went to the BBC Dr. Who exhibition and they gave us the measurements and let us take photographs," said Toby.

"It took us nine weeks to make both of them. The rubber moulded head of Davros was made to fit me - it gives me a chance to play a baddie."

Toby said the three of them were all interested in science fiction and space travel and David has converted his bedroom into a model "Tardis."

"I find making these models gives me a chance to try out most practical hobbies - electronics, sculpture and woodwork," said Toby.

And their most ambitious project yet may get off the ground next year. Toby explained they had devised a rough story line in order to make their own Dalek film.

"We need about five or six more Daleks before we can start filming. We're interested in special effects and may shoot the film in Hopwas quarry," said Toby.