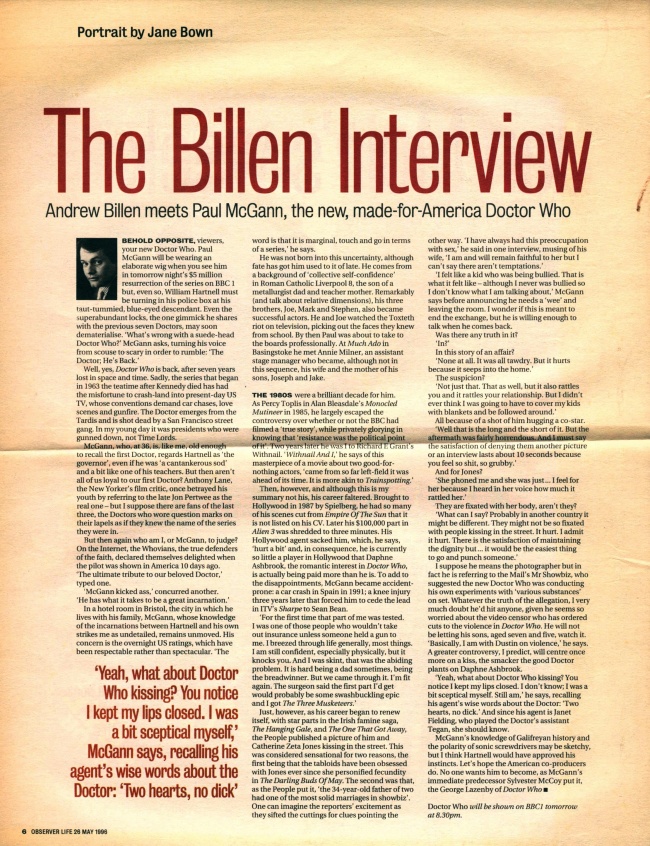 BEHOLD OPPOSITE, viewers, your new Doctor Who. Paul McGann will be wearing an elaborate wig when you see him in tomorrow night's $5 million resurrection of the series on BBC 1-but, even so, William Hartnell must he turning in his police box at his taut-tummied, blue-eyed descendant. Even the superabundant locks, the one gimmick he shares with the previous seven Doctors, may soon dematerialise. 'What's wrong with a suede-head Doctor Who?' McGann asks, turning his voice from scouse to scary in order to rumble: 'The Doctor; He's Back.'

Well, yes, Doctor Who is back, after seven years lost in space and time. Sadly, the series that began in 1963 the teatime after Kennedy died has had the misfortune to crash-land into present-day US TV, whose conventions demand car chases, love scenes and gunfire. The Doctor emerges from the Tardis and is shot dead by a San Francisco street gang. In my young day it was presidents who were gunned down, not Time Lords.

McCann, who, at 36, is, like me, old enough to recall the first Doctor, regards Hartnell as 'the governor', even if he was 'a cantankerous sod' and a bit like one of his teachers. Bat then aren't all of us loyal to our first Doctor? Anthony Lane, the New Yorker's film critic, once betrayed his youth by referring to the late Jon Pertwee as the real one - but I suppose there are fans of the last three, the Doctors who wore question marks on their lapels as if they knew the name of the series they were in.

But then again who am I, or McGann, to judge? On the Internet, the Whovians, the true defenders of the faith, declared themselves delighted when the pilot was shown in America 10 clays ago. 'The ultimate tribute to our beloved Doctor,' typed one.

'McGann kicked ass,' concurred another. 'He has what it takes to be a great incarnation.'

In a hotel room in Bristol, the city in which he lives with his family, McGann, whose knowledge of the incarnations between Hartnell and his own strikes me as undetailed, remains unmoved. His concern is the overnight US ratings, which have been respectable rather than spectacular. 'The word is that it is marginal, touch and go in terms of a series,' he says.

He was not born into this uncertainty, although fate has got him used to it of late. He comes from a background of 'collective Self-confidence, in Roman Catholic Liverpool 8, the son of a metallurgist dad and teacher mother. Remarkably (and talk about relative dimensions), his three brothers: Joe, Mark and Stephen, also became successful actors. He and Joe watched the Toxteth riot on television, picking out the faces they knew from school. By then Paul was about to take to the boards professionally. At Much Ado in Basingstoke he met Annie Milner, an assistant stage manager who became, although not in this sequence, his wife and the mother of his sons, Joseph and Jake.

THE 1980S were a brilliant decade for him. As Percy Toplis in Alan Bleasdale's Monocled Mutineer in 1985, he largely escaped the controversy over whether or not the BBC had filmed a 'true story', while privately glorying in knowing that "resistance was the political point of it' Two years later he was I to Richard E Grant's Withnail. 'Withnail And I,' he says of this masterpiece of a movie about two good-for-nothing actors, 'came from so far left-field it was ahead of its time. It is more akin to Trainspotting.'

Then, however, and although this is my summary not his, his career faltered. Brought to Hollywood in 1987 by Spielberg, he had so many of his scenes cut from Empire Of The Sun that it is not listed on his CV. Later his $100,000 part in Alien 3 was shredded to three minutes. His Hollywood agent sacked him, which, he says, 'hurt a hit' and, in consequence, he is currently so little a player in Hollywood that Daphne Ashbrook, the romantic interest in Doctor Who, is actually being paid more than he is. To add to the disappointments, McGann became accident-prone: a car crash in Spain in 1991; a knee injury three years later that forced him to cede the lead in ITV's Sharpe to Sean Bean.

'For the first time that part of me was tested. I was one of those people who wouldn't take out insurance unless someone held a gun to. me. 1 breezed through life generally, most things. 1 am still confident, especially physically, but it knocks you. And I was skim, that was the abiding problem. It is hard being a clad sometimes, being the breadwinner. But we came through it. I'm fit again. The surgeon said the first part I'd gel would probably be some swashbuckling epic and I got The Three Musketeers.'

Just, however, as his career began to renew itself, with star parts in the Irish famine saga, The [longing Gale, and 'the One That Got Away, the People published a picture of him and Catherine Zeta Jones kissing in the street, This was considered sensational for two reasons, the first being that the tabloids have been obsessed with Jones ever since she personified fecundity in The Darling Buds of May. The second was that, as the People put it, 'the 34-year-old father of two had one of the most solid marriages in showbiz', One can Imagine the reporters' excitement as they sifted the cuttings for clues pointing the other way. 'I have always had this preoccupation with sex,' he said in one interview, musing of his wife, 'I am and will remain faithful to her but can't say there aren't temptations.'

'I felt like a kid who was being bullied.. That is what it felt like - although I never was bullied so I don't know what I am talking about,' McGann . says before announcing he needs a 'wee' and leaving the room. I wonder if this is meant to end the exchange, but he is willing enough to talk when he comes back.

Was there any truth in it?

In this story of an affair?

'None at all. It was all tawdry. But it hurts because it seeps into the home.'

'Not just that. That as well, but it also rattles you and it rattles your relationship. But I didn't ever think I was going to have to cover my kids with blankets and be followed around.'

All because of a shot of him hugging a co-star.

'Well that is the long and the short of it. But the aftermath was fairly horrendous. And I must say the satisfaction of denying them another picture or an interview lasts about 10 seconds because you feel so shit, so grubby.'

'She phoned me and she was just ... I feel for her because I heard in her voice how Much it rattled her.'

They are fixated with her body, aren't they?

'What can I say? Probably in another country it might be different. They might not be so fixated with people kissing in the street. It hurt. I admit it hurt. There is the satisfaction of maintaining the dignity but.., it would be the easiest thing to go and punch someone.'

I suppose he means the photographer but in fact he is referring to the Mail's Mr Showbiz, who suggested the new Doctor Who was conducting his own experiments with 'various substances' on set. Whatever the truth of the allegation, I very much doubt he'd hit anyone, given he seems so worried about the video censor who has ordered cuts to the violence in Doctor Who. He will not be letting his sons, aged seven and five, watch it. 'Basically, I am with Dustin on violence,' he says. A greater controversy, I predict, will centre once more on a kiss, the smacker the good Doctor plants on Daphne Ashbrook,

'Yeah, what about Doctor Who kissing? You notice I kept my lips closed. I don't know; I was a bit sceptical myself. Still am,' he says, recalling his agent's wise words about the Doctor: "Two hearts, no dick,' And since his agent is Janet Fielding, who played the Doctor's assistant Tegan, she should know.

Mc Gann's knowledge of Galifreyan history and the polarity of sonic screwdrivers may be sketchy, but I think Hartnell would have approved his instincts, let's hope the American co-producers do. No one wants him to become, as McGann's immediate predecessor Sylvester McCoy put it, the George Lazenby of Doctor Who.

Doctor Who will be shown on BBC1 tomorrow at 8.30pm.