Another new Doctor Who will see you now 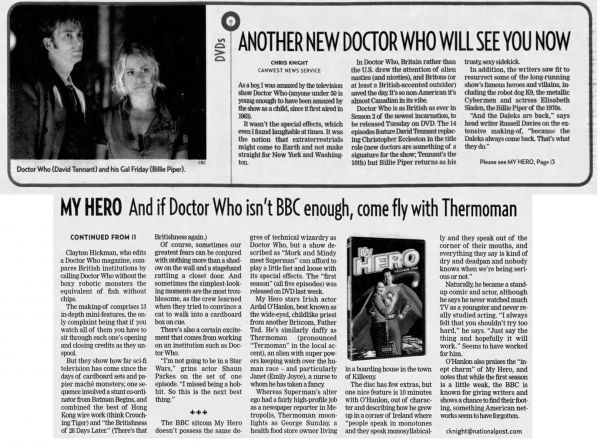 As a boy, I was amazed by the television show Doctor Who (anyone under 50 is young enough to have been amazed by the show as a child, since it first aired in 1963).

It wasn't the special effects, which even I found laughable at times. It was the notion that extraterrestrials might come to Earth and not make straight for New York and Washington.

In Doctor Who, Britain rather than the U.S. drew the attention of alien nasties (and niceties), and Britons (or at least a British-accented outsider) saved the day. It's so non-American it's almost Canadian in its vibe.

Doctor Who is as British as ever in Season 2 of the newest incarnation, to be released Tuesday on DVD. The 14 episodes feature David Tennant replacing Christopher Eccleston in the title role (new doctors are something of a signature for the show; Tennant's the 10th) but Billie Piper returns as his trusty, sexy sidekick.

In addition, the writers saw fit to resurrect some of the long-running show's famous heroes and villains, including the robot dog K9, the metallic Cybermen and actress Elisabeth Sladen, the Billie Piper of the 1970s.

"And the Daleks are back," says head writer Russell Davies on the extensive making-of, "because the Daleks always come back. That's what they do."

Clayton Hickman, who edits a Doctor Who magazine, compares British institutions by calling Doctor Who without the boxy robotic monsters the equivalent of fish without chips.

The making-of comprises 13 in-depth mini-features, the only complaint being that if you watch all of them you have to sit through each one's opening and closing credits as they unspool.

But they show how far sci-fi television has come since the days of cardboard sets and papier mache monsters; one sequence involved a stunt co-ordinator from Batman Begins, and combined the best of Hong Kong wire work (think Crouching Tiger) and "the Britishness of 28 Days Later." (There's that Britishness again.)

Of course, sometimes our greatest fears can be conjured with nothing more than a shadow on the wall and a stagehand rattling a closet door. And sometimes the simplest-looking moments are the most troublesome, as the crew learned when they tried to convince a cat to walk into a cardboard box on cue.

There's also a certain excitement that comes from working on an institution such as Doctor Who.

"I'm not going to be in a Star Wars," grins actor Shaun Parkes on the set of one episode. "I missed being a hobbit. So this is the next best thing."