Are our bodies falling to bits in the computer age? 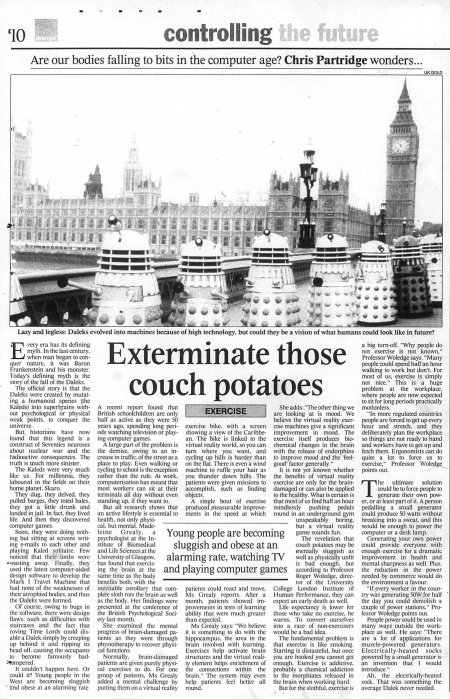 Every era has its defining myth. In the last century, when man began to conquer nature, it was Baron Frankenstein and his monster. Today's defining myth is the story of the fall of the Daleks. The official story is that the Daleks were created by mutating a humanoid species (the Kaleds) into superbrains without psychological or physical weak points, to conquer the universe.

But, historians have now found that this legend is a construct of Seventies neuroses about nuclear war and the radioactive consequences. The truth is much more sinister. The Kaleds were very much like us. For millennia, they laboured in the fields on their home planet, Skaro.

They dug, they delved, they pulled barges, they toted bales, they got a little drunk and landed in jail. In fact, they lived life. And then they discovered computer games.

Soon, they were doing nothing but sitting at screens writing e-mails to each other and playing Kaled solitaire. Few noticed that their limbs were wasting away. Finally, they used the latest computer-aided design software to develop the Mark I Travel Machine that had none of the weaknesses of their atrophied bodies, and thus the Daleks were formed.

Of course, owing to bugs in the software, there were design flaws. Such as difficulties with staircases and the fact that roving Time Lords could dis: able a Dalek simply by creeping up behind it and ripping its head off, causing the occupants to become famously bad-tempered.

It couldn't happen here. Or could it? Young people in the West are becoming sluggish and obese at an alarming rate. A recent report found that British schoolchildren are only half as active as they were 50 years ago, spending long periods watching television or playing computer games.

A large part of the problem is the demise, owing to an increase in traffic, of the street as a place to play. Even walking or cycling to school is the exception rather than the rule. At work, computerisation has meant that most workers can sit at their terminals all day without even standing up, if they want to.

But all research shows that an active lifestyle is essential to health, not only physical, but mental. Madeleine Grealy, a psychologist at the Institute of Biomedical and Life Sciences at the University of Glasgow, has found that exercising the brain at the same time as the body benefits both, with the inevitable corollary that complete sloth rots the brain as well as the body. Her findings were presented at the conference of the British Psychological Society last month.

She examined the mental progress of brain-damaged patients as they went through physiotherapy to recover physical functions.

Normally, brain-damaged patients are given purely physical exercises to do. For one group of patients, Ms Grealy added a mental challenge by putting them on a virtual reality exercise bike, with a screen showing a view of the Caribbean. The bike is linked to the virtual reality world, so you can turn where you want, and cycling up hills is harder than on the flat. There is even a wind machine to ruffle your hair as you thunder down hills. The patients were given missions to accomplish, such as finding objects.

A single bout of exercise produced measurable improvements in the speed at which patients could react and move, Ms Grealy reports. After a month, patients showed improvements in tests of learning ability that were much greater than expected.

Ms Grealy says: "We believe it is something to do with the hippocampus, the area in the brain involved with learning. Exercises help activate brain structures and the virtual reality element helps enrichment of the connections within the brain." The system may even help patients feel better all round.

She adds: "The other thing we are looking at is mood. We believe the virtual reality exercise machines give a significant improvement in mood. The exercise itself produces biochemical changes in the brain with the release of endorphins to improve mood and the 'feel-good' factor generally."

It is not yet known whether the benefits of virtual reality exercise are only for the brain-damaged or can also be applied to the healthy. What is certain is that Most of us find half an hour mindlessly pushing pedals round in an underground gym unspeakably boring, but a virtual reality game sounds fun.

The revelation that couch potatoes may be mentally sluggish as well as physically unfit is bad enough, but according to Professor Roger Woledge, director of the University College London Institute of Human Performance, they can expect an early death as well.

Life expectancy is lower for those who take no exercise, he warns. To convert ourselves into a race of non-exercisers would be a bad idea.

The fundamental problem is that exercise is like smoking. Starting is distasteful, but once you are hooked you cannot get enough. Exercise is addictive, probably a chemical addiction to the morphiates released in the brain when working hard.

But for the slothful, exercise is a big turn-off. "Why people do not exercise is not known." Professor Woledge says. "Many'. people could spend halfan hour walking to work but don't. For most of us, exercise is simply not nice." This is a huge problem at the workplace, where people are now expected to sit for long periods practically motionless.

"In more regulated countries people are forced to get up every hour and stretch, and they deliberately plan the workplace so things are not ready to hand and workers have to get up and fetch them. Ergonomists can do quite a lot to force us to exercise," Professor Woledge points out.

The ultimate solution could be to force people to generate their own power, or at least part of it. A person pedalling a small generator could produce 50 watts without breaking into a sweat, and this would be enough to power the computer or a desk lamp.

Generating your own power could provide everyone with enough exercise for a dramatic improvement in health and mental sharpness as well. Plus, the reduction in the power needed by commerce would do the environment a favour.

"If every worker in the country was generating 50W for half the day you could demolish a couple of power stations," Professor Woledge points out.

People power could be used in many ways outside the workplace as well. He says: "There are a lot of applications for muscle-powered generators. Electrically-heated socks powered by a small generator is an invention that I would introduce."

Ah, the electrically-heated sock. That was something the average Dalek never needed.

Caption: Lazy and legless: Daleks evolved into machines because of high technology, but could they be a vision of what humans could look like in future?