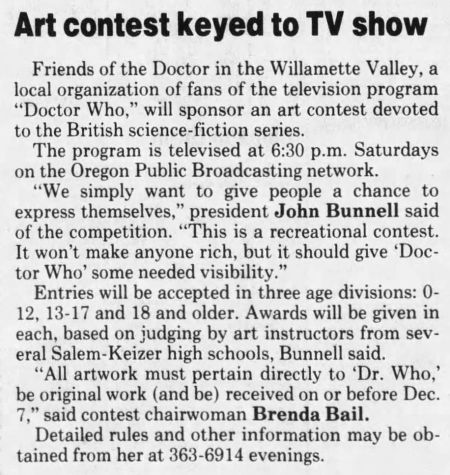 Friends of the Doctor in the Willamette Valley, a local organization of fans of the television program "Doctor Who," will sponsor an art contest devoted to the British science-fiction series.

The program is televised at 6:30 p.m. Saturdays on the Oregon Public Broadcasting network.

"We simply want to give people a chance to express themselves," president John Bunnell said of the competition. "This is a recreational contest. It won't make anyone rich, but it should give 'Doctor Who' some needed visibility."

Entries will be accepted in three age divisions: 012, 13-17 and 18 and older. Awards will be given in each, based on judging by art instructors from several Salem-Keizer high schools, Bunnell said.

"All artwork must pertain directly to 'Dr. Who,' be original work (and be) received on or before Dec. 7," said contest chairwoman Brenda Bail.

Detailed rules and other information may be obtained from her at 363-6914 evenings.