As queer as Dr Who? 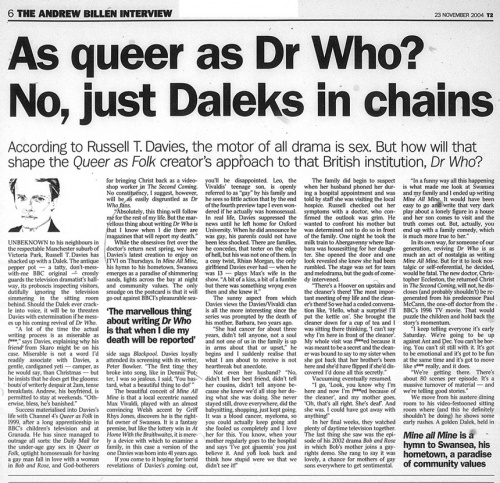 As queer as Dr Who? No, just Daleks in chains

According to Russell T. Davies, the motor of all drama is sex. But how will that shape the Queer as Folk creator's approach to that British institution, Dr Who?

UNBEKNOWN to his neighbours in the respectable Manchester suburb of Victoria Park, Russell T. Davies has shacked up with a Dalek. The antique pepper pot — a tatty, don't-messwith-me BBC original = crossly guards the television dramatist's hallway, its proboscis inspecting visitors, dutifully ignoring the television simmering in the sitting room behind. Should the Dalek ever crackle into voice, it will be to threaten Davies with extermination if he messes up his coming revival of Dr Who.

"A lot of the time the actual writing process is as miserable as f***," says Davies, explaining why his friend from Skaro might be on his case. Miserable is not a word I'd readily associate with Davies, a gentle, cardiganed yeti — camper, as he would say, than Christmas — but he insists that he does get the glooms: bouts of writerly despair at 2am, tense breakfasts. Andrew, his boyfriend, is permitted to stay at weekends. "Otherwise, bless, he's banished."

Success materialised into Davies's life with Channel 4's Queer as Folk in 1999, after a long apprenticeship in BBC's children's television and at Granada. He has since managed to outrage all sorts: the Daily Mail for the under-age gay sex in Queer as Folk, uptight homosexuals for having a gay man fall in love with a woman in Bob and Rose, and God-botherers for bringing Christ back as a video-shop worker The Second Coming. No constituency, I suggest, however, will be as easily disgruntled as Dr Who fans.

"Absolutely, this thing will follow for the rest of my life. But the marvellous thing about writing Dr Who is shat I know when I die there are /magazines that will report my death."

While the obsessives fret over the doctor's return next spring, we have Davies's latest creation to enjoy on ITV1 on Thursdays. In Mine All Mine, his hymn to his hometown, Swansea emerges as a paradise of shimmering sands, lights across the bay at night and community values. The only smudge on the postcard is that it will go out against BBC1's pleasurable sea-side saga Blackpool. Davies loyally attended its screening with its writer, Peter Bowker. "The first time they broke into song, like in Dennis Potter, I was so jealous. I said, 'You bastard, what a beautiful thing to do!'"

The beautiful conceit of Mine All Mine is that a local eccentric named Max Vivaldi, played with an almost convincing Welsh accent by Griff Rhys Jones, discovers he is the rightful owner of Swansea. It is a fantasy premise, but like the lottery win in At Home With the Braithwaites, it is merely a device with which to examine a family, in this case a version of the one Davies was born into 41 years ago.

If you come to it hoping for torrid revelations of Davies's coming out, you'll be disappointed. Leo, the Vivaldis' teenage son, is openly referred to as "gay" by his family and he sees so little action that by the end of the fourth preview tape I even wondered if he actually was homosexual. In real life, Davies suppressed the news until he left home for Oxford University. When he did announce he was gay, his parents could not have been less shocked. There are families, he concedes, that teeter on the edge of hell, but his was not one of them. In a cosy twist, Rhian Morgan, the only girlfriend Davies ever had — when he was 13 — plays Max's wife in the show. "A bit of a kiss, a bit of a fumble but there was something wrong even then and she knew it."

The sunny aspect from which Davies views the Davies/Vivaldi clan is all the more interesting since the series was prompted by the death of his mother, Barbara, two years ago.

"She had cancer for about three years, didn't tell anyone, not a soul and not one of us in the family is up in arms about that or upset," he begins and I suddenly realise that what I am about to receive is not heartbreak but anecdote.

Not even her husband? "No, didn't tell her best friend, didn't tell her cousins, didn't tell anyone because she knew we'd all stop her doing what she was doing. She never stayed still, drove everywhere, did the babysitting, shopping, just kept going. It was a blood cancer, myeloma, so you could actually keep going and she fooled us completely and I love her for this. You know, when your mother regularly goes to the hospital and says 'I've got anaemia' you just believe it. And you look back and think how stupid were we that we didn't see it!"

The family did begin to suspect when her husband phoned her during a hospital appointment and was told by staff she was visiting the local hospice. Russell checked out her symptoms with a doctor, who confirmed the outlook was grim. He wanted to confront his mother but was determined not to do so in front of the family. One night he took the milk train to Abergavenny where Barbara was housesitting for her daughter. She opened the door and one look revealed she knew she had been rumbled. The stage was set for tears and melodrama, but the gods of comedy intervened.

"There's a Hoover on upstairs and the cleaner's there! The most important meeting of my life and the cleaner's there! So we had a coded conversation like, 'Hello, what- a surprise! I'll put the kettle on'. She brought the cleaner down for a cup of tea and I was sitting there thinking, 'I can't say why I'm here in front of the cleaner'. My whole visit was f**cd because it was meant to be a secret and the cleaner was bound to say to my sister when she got back that her brother's been here and she'd have flipped if she'd discovered I'd done all this secretly."

In her final weeks, they watched plenty of daytime television together. The last thing she saw was the episode of his 2002 drama Bob and Rose in which Bob's mother joins a gay-rights demo. She rang to say it was lovely, a chance for mothers of gay sons everywhere to get sentimental.

"In a funny way all this happening is what made me look at Swansea and my family and I ended up writing Mine All Mine. It would have been easy to go and write that very dark play about a lonely figure in a house and her son comes to visit and the truth comes out. But, actually, you end up with a family comedy, which is much more true to her."

In its own way, for someone of our generation, reviving Dr Who is as much an act of nostalgia as writing Mine All Mine. But for it to look nostalgic or self-referential, he decided, would be fatal. The new doctor, Christopher Eccleston, the returned Christ in The Second Coming, will not, he discloses (and probably shouldn't) be regenerated from his predecessor Paul McGann, the one-off doctor from the BBC's 1996 TV movie. That would puzzle the children and hold back the story's momentum.

"We're getting there. There's about 80 scenes per episode. It's a massive turnover of material — and we're telling good stories."

We move from his austere dining room to his video-festooned sitting room where (and this he definitely shouldn't be doing) he shows some early rushes. A golden Dalek, held in

Mine all Mine is a hymn to Swansea, his hometown, a paradise of community values