As the Daleks threaten life on Earth 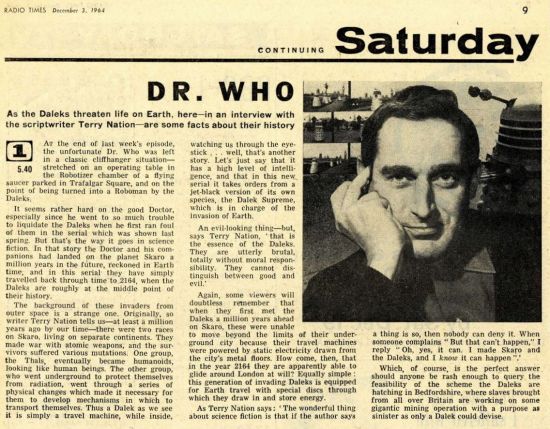 As the Daleks threaten life on Earth, here—in an interview with the scriptwriter Terry Nation—are some facts about their history

AT the end of last week's episode, the unfortunate Dr. Who was left in a classic cliffhanger situation-5A0 stretched on an operating table in the Robotizer chamber of a flying saucer parked in Trafalgar Square, and on the point of being turned into a Roboman by the Daleks.

It seems rather hard on the good Doctor, especially since he went to so much trouble to liquidate the Daleks when he first ran foul of them in the serial which was shown last spring. But that's the way it goes in science fiction. In that story the Doctor and his companions had landed on the planet Skaro a million years in the future, reckoned in Earth time, and in this serial. they have simply travelled back through time to 2164, when the Daleks are roughly at the middle point of their history.

The background of these invaders from outer space is a strange one. Originally, so writer Terry Nation tells us—at least a million years ago by our time—there were two races on Skaro, living on separate continents. They made war with atomic weapons, and the survivors suffered various mutations. One group, the Thals, eventually became humanoids, looking like human beings. The other group, who went underground to protect themselves from radiation, went through a series of physical changes which made it necessary for them to develop mechanisms in which to transport themselves. Thus a Dalek as we see it is simply a travel machine, while inside,

watching us through the eye-stick .. . well, that's another story. Let's just say that it has a high level of intelligence, and that in this new serial it takes orders from a jet-black version of its own species, the Dalek Supreme, which is in charge of the invasion of Earth.

An evil-looking thing—but, says Terry Nation, that is the essence of the Daleks. They are utterly brutal, totally without moral responsibility. They cannot distinguish between good and evil.'

Again, some viewers will doubtless remember that when they first met the Daleks a million years ahead on Skaro, these were unable to move beyond the limits of their underground city because their travel machines were powered by static electricity drawn from the city's metal floors. How come, then, that in the year 2164 they are apparently able to glide around London at will? Equally simple : this generation of invading Daleks is equipped for Earth travel with special discs through which they draw in and store energy.

As Terry Nation says: 'The wonderful thing about science fiction is that If the author says a thing is so, then nobody can deny it. When someone complains "But that can't happen," I reply "Oh, yes, it can. I made Skaro and the Daleks, and I know it can happen".'

Which, of course, is the perfect answer should anyone be rash enough to query the feasibility of the scheme the Daleks are hatching in Bedfordshire, where slaves brought from all over Britain are working on some gigantic mining operation with a purpose as sinister as only a Dalek could devise.