Attack of the funnybook fanatics 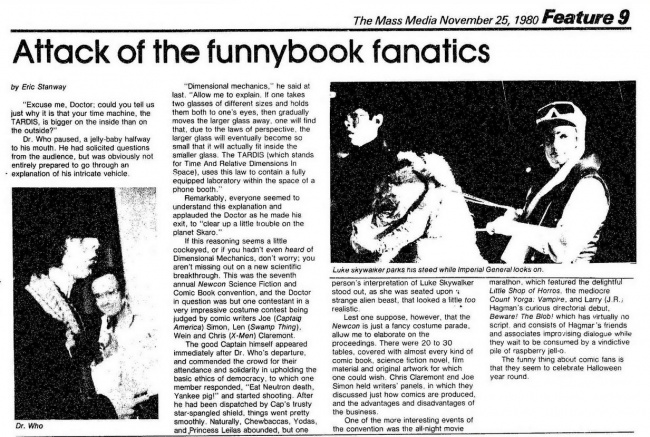 "Excuse me, Doctor: could you tell us just why it is that your time machine, the TARDIS, is bigger on the inside than on the outside?"

Dr. Who paused, a jellybaby halfway to his mouth. He had solicited questions from the audience, but was obviously not entirely prepared to go through an - explanation of his intricate vehicle.

"Dimensional mechanics," he said at last. "Allow me to explain. If one takes two glasses of different sizes and holds them both to one's eyes, then gradually moves the larger glass away. one will find that. due to the laws of perspective. the larger glass will eventually become so small that it will actually fit inside the smaller glass. The TARDIS (which stands for Time And Relative Dimensions In Space), uses this law to contain a fully equipped laboratory within the space of a phone booth."

Remarkably, everyone seemed to understand this explanation and applauded the Doctor as he made his exit, to "clear up a little trouble on the planet Skaro."

If this reasoning seems a little cockeyed, or if you hadn't even heard of Dimensional Mechanics, don't worry: you aren't missing out on a new scientific breakthrough. This was the seventh annual Newcon Science Fiction and Comic Book convention, and the Doctor in question was but one contestant in a very impressive costume contest being judged by comic writers Joe (Captain America) Simon, Len (Swamp Thing), Wein and Chris (X-Men) Claremont.

The good Captain himself appeared immediately after Dr. Who's departure. and commended the crowd for their attendance and solidarity in upholding the basic ethics of democracy, to which one member responded, "Eat Neutron death, Yankee pig!" and started shooting. After he had been dispatched by Cap's trusty star-spangled shield. things went pretty smoothly. Naturally, Chewbaccas, Yodas, and Princess Leilas abounded, but one person's interpretation of Luke Skywalker stood out. as she was seated upon strange alien beast, that looked a little too realistic.

Lest one suppose, however, that the Newcon is just a fancy costume parade, allow me to elaborate on the proceedings. There were 20 to 30 tables, covered with almost every kind of comic book, science fiction novel, film material and original artwork for which one could wish. Chris Claremont end Joe Simon held writers' panels. in which they discussed just how comics are produced, and the advantages and disadvantages of the business.

One of the more interesting events of the convention was the all-night movie marathon. which featured the delightful Little Shop of Horrors, the mediocre Count Yorga: Vampire, and Larry (J R., Hagman's curious directorial debut, Beware! The Blob! which has virtually no script and consists of Hagmar's friends and associates improvising dialogue while they wait to be consumed by a vindictive pile of raspberry jell-o.

The funny thing about comic fans is that they seem to celebrate Halloween year round.