Attention all Doctor Who fans ... 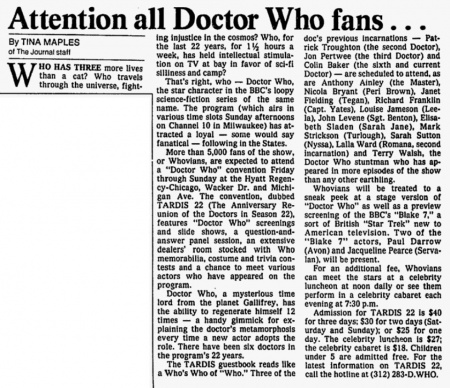 WHO HAS THREE more lives than a cat? Who travels through the universe, fighting injustice In the cosmos? Who, for the last 22 years, for 114 hours a week, has held intellectual stimulation on TV at bay in favor of sci-fi silliness and camp?

That's right, who — Doctor Who, the star character in the BBC's loopy science-fiction series of the same name. The program (which airs In various time slots Sunday afternoons on Channel 10 in Milwaukee) has attracted a loyal — some would say fanatical — following in the States.

More than 5,000 funs of the show, or Whovians, are expected to attend a "Doctor Who" convention Friday through Sunday at the Hyatt Regency-Chicago, Wacker Dr. and Michigan Ave. The convention, dubbed TARDIS 22 (The Anniversary Reunion of the Doctors in Season 22), features "Doctor Who" screenings and slide shows, a question-and-answer panel session, an extensive dealers' room stocked with Who memorabilia, costume and trivia contests and a chance to meet various actors who have appeared on the program.

Doctor Who, a mysterious time lord from the planet Gallifrey, has the ability to regenerate himself 12 times — a handy gimmick for explaining the doctor's metamorphosis every time a new actor adopts the role. There have been six doctors in the program's 22 years.

The TARDIS guestbook reads like a Who's Who of "Who." Three of the doc's previous incarnations — Patrick Troughton (the second Doctor), Jon Pertwee (the third Doctor) and Colin Baker (the sixth and current Doctor) — are scheduled to attend, as are Anthony Ainley (the Master), Nicola Bryant (Peri Brown), Janet Fielding (Tegan), Richard Franklin (Capt. Yates), Louise Jameson (Lee-la), John Levene (Sgt. Benton), Elisabeth Sladen (Sarah Jane), Mark Strickson (Turlough), Sarah Sutton (Nyssa), Lalla Ward (Romana, second incarnation) and Terry Walsh, the Doctor Who stuntman who has appeared In more episodes of the show than any other earthling.

Whovians will be treated to a sneak peek at a stage version of "Doctor Who" as well as a preview screening of the BBC's "Blake 7," a sort of British "Star Trek" new to American television. Two of the "Blake 7" actors, Paul Darrow (Avon) and Jacqueline Pearce (Servalan), will be present.

For an additional fee, Whovians can meet the stars at a celebrity luncheon at noon daily or see them perform in a celebrity cabaret each evening at 7:30 p.m.