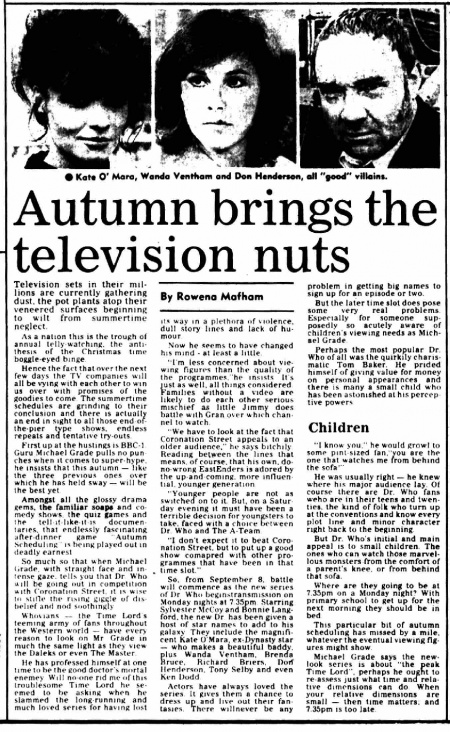 Television sets in their millions are currently gathering dust, the pot plants atop their veneered surfaces beginning to wilt from summertime neglect.

As a nation this is the trough of annual telly-watching. the antithesis of the Christmas time boggle-eyed binge.

Hence the fact that over the next few days the TV companies will all be vying with each other to win us over with promises of the goodies to come. The summertime schedules are grinding to their conclusion and there is actually an end in sight to all those end-of-the-pier type shows, endless repeats and tentative try-outs.

First up at the hustings is BBC-1 Guru Michael Grade pulls no punches when it comes to super-hype, he insists that this autumn like the three previous ones over which he has held sway will be the best yet.

Amongst all the glossy drama gems, the familiar soaps and comedy shows, the quiz games and the tell-it-like-it-is documentaries, that endlessly fascinating after-dinner game "Autumn Scheduling" is being played out in deadly earnest.

So much so that when Michael Grade, with straight face and intense gaze, tells you that Dr. Who will be going out in competition with Coronation Street, it is wise to stifle the rising giggle of disbelief and nod soothingly.

Whovians-the Time Lord's teeming army of fans throughout the Western world-have every reason to look on Mr Grade in much the same light as they view the Daleks or even The Master.

He has professed himself at one time to be the good doctor's mortal enemey. Will no-one rid me of this troublesome Time Lord he seemed to be asking when he slammed the long-running and much loved series for having lost its way in a plethora of violence, dull story lines and lack of humour.

Now he seems to have changed his mind - at least a little. "I'm less concerned about viewing figures than the quality of the programmes," he insists. It's just as well, all things considered. Families without a video are likely to do each other serious mischief as little Jimmy does battle with Gran over which channel to watch.

"We have to look at the fact that Coronation Street appeals to an older audience," he says bitchily. Reading between the lines that means, of course, that his own, do+-no-wrong EastEnders is adored by the up-and-coming, more influential, younger generation.

"Younger people are not as switched on to it. But, on a Saturday evening it must have been a terrible decision for youngsters to take, faced with a choice between Dr. Who and The A-Team.

"I don't expect it to beat Coronation Street, but to put up a good show compared with other programmes that have been in that time slot."

So, from September 8, battle will commence as the new series of Dr Who begins transmission on Monday nights at 7.35 pm. Starring Sylvester McCoy and Bonnie Langford, the new Dr. has been given a host of star names to add to his galaxy They include the magnificent Kate O'Mara ex-Dynasty star who makes a beautiful baddy, plus Wanda Ventham, Brenda Bruce, Richard Briers, Don Henderson. Tony Selby and even Ken Dodd.

Actors have always loved the series. It gives them a chance to dress up and live out their fantasies. There will never be any problem in getting big names to sign up for an episode or two.

But the later time slot does pose some very real problems. Especially for someone supposedly so acutely aware of children's viewing needs as Michael Grade.

Perhaps the most popular Dr. Who of all was the quirkily charismatic Tom Baker. He prided himself of giving value for money on personal appearances and there is many a small child who has been astonished at his perceptive powers.

"I know you," he would growl to some pint-sized fan, "you are the one that watches me from behind the sofa'"

He was usually right he knew where his major audience lay. Of course there are Dr. Who fans who are in their teens and twenties, the kind of folk who turn up at the conventions and know every plot line and minor character right back to the beginning.

But Dr. Who's initial and main appeal is to small children. The ones who can watch those marvelous monsters from the comfort of a parent's knee, or from behind that sofa.

Where are they going to be at 7.35 pm on a Monday night? With primary school to get up for the next morning they should be in bed.

This particular bit of autumn scheduling has missed by a mile, whatever the eventual viewing figures might show.