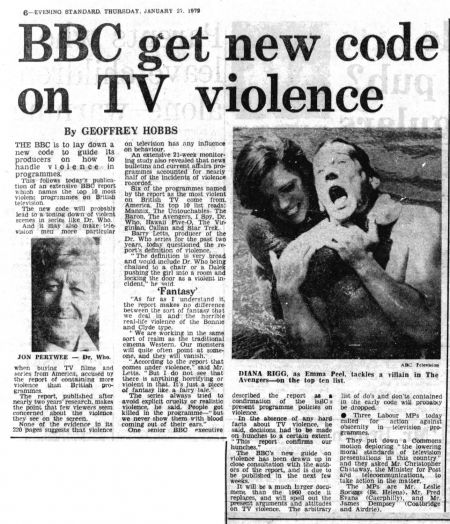 THE BBC is to lay down a new code to guide its producers on how to handle violence in programmes.

This follows today's publication of an extensive BBC report which names the top 10 most violent programmes on British television.

The new code will probably lead to a toning down of violent scenes in series like Dr. Who.

And it may also make television men more particular when buying TV films and series from America, accused in, the report of containing more violence than British programmes.

The report, published after nearly two years' research. makes the point that few viewers seem concerned about the violence they see on the screen.

None of the evidence in its 220 pages suggests that violence on television has any influence on behaviour.

An extensive 21-week monitoring study also revealed that news bulletins and current affairs programmes accounted for nearly half of the incidents of violence recorded.

Six of the programmes named by the report as the most violent on British TV come from. America. Its top 10 list reads: Mannix, The Untouchables. The Baron, The Avengers, I Spy, Dr. Who, Hawaii Five-O, The Virginian, Callan and Star Trek.

Barry Letts, producer of the Dr. Who series for the past two years, today questioned the report's definition of violence.

'The definition is very broad and would include Dr. Who being chained to a chair or a Dalek pushing the girl into a room and locking the door as a violent incident," he said.

"As far as I understand it, the report makes no difference between the sort of fantasy that we deal in and the horrible real-life violence of the Bonnie and Clyde type.

"We are working in the same sort of realm as the traditional cinema Western. Our monsters will quite often point at someone, and they will vanish.

"According to the report that comes under violence," said Mr. Letts. "But I do not see that there is anything horrifying or violent in that. It's just a piece of fantasy like a fairy tale."

The series always tried to avoid explicit cruelty or realistic violence, he said. People got killed in the programme—" but we never show them with blood coming out of their ears."

One senior BBC executive described the report as a confirmation of the BBC s present programme policies on violence.

In the absence of any hard facts about TV violence, he said, decisions had to be made on hunches to a certain extent.

This report confirms our hunches."

The BBC's new guide on violence has been drawn up in close consultation with the authors of the report, and is due to be published in the next few weeks.

It will be a much larger document than the 1960 code it replaces, and will spell out the present arguments and attitudes on TV violence. The arbitrary list of do's and don'ts contained in the early code wild probab'y be dropped.

They put down a Commons motion deploring "the lowering moral standards of television presentations in this country and they asked Mr. Christopher Chataway, the Minister for Post and telecommunications, to take action in the matter.

Caption: DIANA RIGG, as Emma Peel, tackles a villain in The Avengers—on the top ten list.