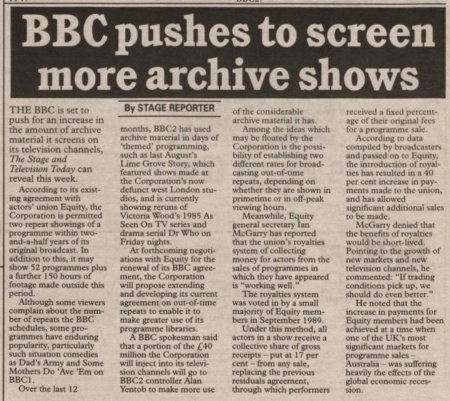 THE BBC is set to push for an increase in the amount of archive material it screens on its television channels, The Stage and Television Today can reveal this week.

According to its existing agreement with actors' union Equity, the Corporation is permitted two repeat showings of a programme within two-and-a-half years of its original broadcast. In addition to this, it may show 52 programmes plus a further 150 hours of footage made outside this period.

Although some viewers complain about the number of repeats the BBC schedules, some programmes have enduring popularity, particularly such situation comedies as Dad's Army and Some Mothers Do 'Ave 'Em on BBC 1.

Over the last 12 months, BBC2 has used archive material in days of 'themed' programming, such as last August's Lime Grove Story, which featured shows made at the Corporation's now defunct west London studios, and is currently showing reruns of Victoria Wood's 1985 As Seen On TV series and drama serial Dr Who on Friday nights.

At forthcoming negotiations with Equity for the renewal of its BBC agreement, the Corporation will propose extending and developing its current agreement on out-of-time repeats to enable it to make greater use of its programme libraries.

A BBC spokesman said that a portion of the £40 million the Corporation will inject into its television channels will go to BBC2 controller Alan Yentob to make more use of the considerable archive material it has.

Among the ideas which may be floated by the Corporation is the possibility of establishing two different rates for broadcasting out-of-time repeats, depending on whether they are shown in primetime or in off-peak viewing hours.

Meanwhile, Equity general secretary Ian McGarry has reported that the union's royalties system of collecting money for actors from the sales of programmes in which they have appeared is "working well."

The royalties system was voted in by a small majority of Equity members in September 1989.

Under this method, all actors in a show receive a collective share of gross receipts - put at 17 per cent -- from any sale, replacing the previous residuals agreement, through which performers received a fixed percentage of their original fees for a programme sale.

According to data compiled by broadcasters and passed on to Equity, the introduction of royalties has resulted in a 40 per cent increase in payments made to the union, and has allowed significant additional sales to be made.

McGarry denied that the benefits of royalties would be short-lived. Pointing to the growth of new markets and new television channels, he commented: "If trading conditions pick up, we should do even better."

He noted that the increase in payments for Equity members had been achieved at a time when one of the UK's most significant markets for programme sales Australia - was suffering heavily the effects of the global economic recession.