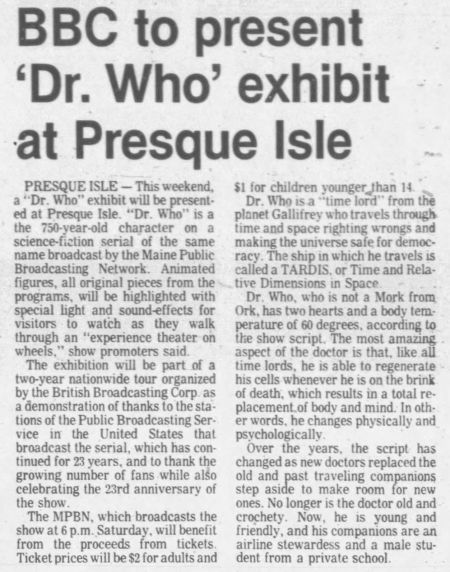 PRESQUE ISLE — This weekend, a "Dr. Who" exhibit will be presented at Presque Isle. "Dr. Who" is a the 750-year-old character on a science-fiction serial of the same name broadcast by the Maine Public Broadcasting Network. Animated figures, all original pieces from the programs, will be highlighted with special light and sound-effects for visitors to watch as they walk through an "experience theater on wheels." show promoters said.

Dr. Who is a "Time Lord" from the planet Gallifrey who travels through time and space righting wrongs and making the universe safe for democracy. The ship in which he travels is called a TARDIS. or Time and Relative Dimensions in Space.

Dr Who, who is not a Mork from Ork, has two hearts and a body temperature of 60 degrees, according to the show script. The most amazing aspect of the doctor is that. like all time lords, he is able to regenerate his cells whenever he is on the brink of death, which results in a total replacement of body and mind. In other words. he changes physically and psychologically.

Over the years, the script has changed as new doctors replaced the old and past traveling companions step aside to make room for new ones. No longer is the doctor old and crochety. Now, he is young and friendly, and his companions are an airline stewardess and a male student from a private school.