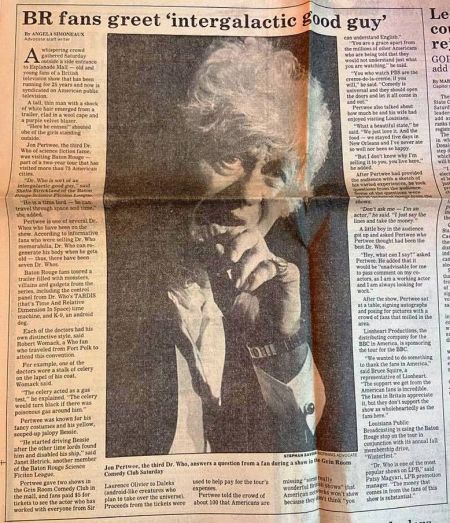 A whispering crowd gathered Saturday outside a side entrance to Esplanade Mall -- old and young fans of a British television show that has been running for 25 years and now is syndicated on American public television.

A tall, thin man with a shock of white hair emerged from a trailer, clad in a wool cape and a purple velvet blazer.

"Here he comes!" shouted one of the girls standing outside.

Jon Pertwee, the third Dr. Who of science fiction fame, was visiting Baton Rouge -- part of a two-year tour that has visited more than 75 American cities.

"Dr. Who is sort of an intergalactic good guy," said Shelia Strickland of the Baton Rouge Science Fiction League.

"He is a time lord -- he can travel through space and time," she added.

Pertwee is one of several Dr. Whos who have been on the show. According to informative fans who were selling Dr. Who memorabilia, Dr. Who can re-generate his body when he gets old -- thus, there have been seven Dr. Whos.

Baton Rouge fans toured a trailer filled with monsters, villains and gadgets from the series, including the control panel from Dr. Who's TARDIS (that's Time And Relative Dimension In Space) time machine, and K-9, an android dog.

Each of the doctors had his own distinctive style, said Robert Womack, a Who fan who traveled from Fort Polk to attend this convention.

For example, one of the doctors wore a stalk of celery on the lapel of his coat, Womack said.

"The celery acted as a gas test," he explained. "The celery would turn black if there was poisonous gas around him."

Pertwee was known for his fancy costumes and his yellow, souped-up jalopy Bessie.

"He started driving Bessie after the other time lords found him and disabled his ship," said Janet Hetrick, another member of the Baton Rouge Science Ficiton League.

Pertwee gave two shows in the Grin Room Comedy Club in the mall, and fans paid $5 for tickets to see the actor who has worked with everyone from Sir Laurence Olivier to Daleks (android-like creatures who plan to take over the universe). Proceeds from the tickets were used to help pay for the tour's expenses.

Pertwee told the crowd of about 100 that Americans are missing "some really wonderful British shows" that American networks won't show because they don't think "you can understand English."

"You are a grace apart from the millions of other Americans who are being told that they would not understand just what you are watching," he said.

"You who watch PBS are the creme-de-la-creme, if you will," he said. "Comedy is universal and they should open the doors and let it all come in and out."

Pertwee also talked about how much he and his wife had enjoyed visiting Louisiana.

"What a beautiful state," he said. "We just love it. And the food -- we stayed five days in New Orleans and I've never ate so well nor been so happy.

"But I don't know why I'm selling it to you, you live here," he added.

After Pertwee had provided the audience with a sketch of his varied experiences, he took questions from the audience. Some of the questions were about technical things from the shows.

A little boy in the audience got up and asked Pertwee who Pertwee thought had been the best Dr. Who.

"Hey, what can I say?" asked Pertwee. He added that it would be "unadvisable for me to pass comment on my co-actors, as I am a working actor and I am always looking for work."

After the show, Pertwee sat at a table, signing autographs and posing for pictures with a crowd of fans that milled in the area.

Lionheart Productions, the distributing company for the BBC in America, is sponsoring the tour for the BBC.

"We wanted to do something to thank the fans in America," said Bruce Squire, a representative of Lionheart. "The support we get from the American fans is incredible. The fans in Britain appreciate it, but they don't support the show as wholeheartedly as the fans here."

Louisiana Public Broadcasting is using the Baton Rouge stop on the tour in conjunction with its annual fall membership drive, "Winterfest."

"Dr. Who is one of the most popular shows on LPB," said Patsy Magyari, LPB promotion manager. "The money that comes in from the fans of this show is substantial."