Back In Time With Dr. Who 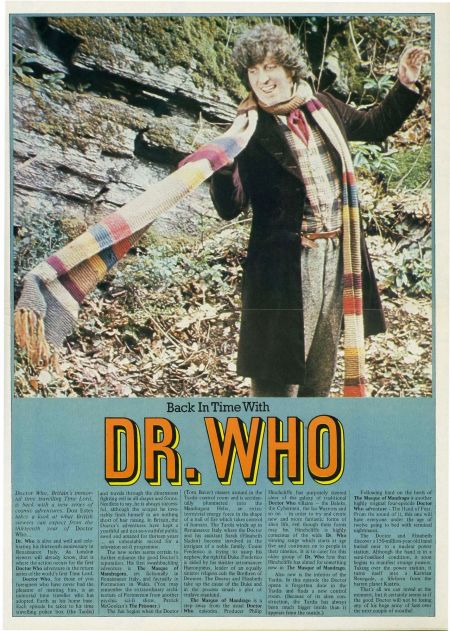 Doctor Who, Britain's immortal tune travelling Time Lord, is back with ci new series of cosmic adventures. Don Estes takes a look at what British viewers can expect from the thirteenth year of Doctor Who...

Dr. Who is alive and well and celebrating his thirteenth anniversary in Renaissance Italy. As London viewers will already know, that is where the action occurs for the first Doctor Who adventure in the return series of the world's first Time Lord.

Doctor Who, for those of you foreigners who have never had the pleasure of meeting him, is an immortal time traveller who has adopted Earth as his home base. Each episode he takes to his time travelling police box (the Tardis) and travels through the dimensions fighting evil in all shapes and forms. Needless to say, he is always successful, although the scrapes he invariably finds himself in are nothing short of hair raising. In Britain, the Doctor's adventures have kept a youthful and not-so-youthful public awed and amazed for thirteen years ... an unbeatable record for a television sci-fi programme.

The new series seems certain to further enhance the good Doctor's reputation. His first swashbuckling adventure is The Masque of Mandragora, set fictionally in Renaissance Italy, and factually in Portmerion in Wales. (You may remember the extraordinary architecture of Portmerion from another psychic sci-fi show, Patrick McGoohan's The Prisoner.)

The fun begins when the Doctor (Tom Baker) masses around in the Tardis control room and is accidentally plummeted into the Mandragora Helix, an extraterrestrial energy force in the shape of a ball of fire which takes control of humans. The Tardis winds up in Renaissance Italy where the Doctor and his assistant Sarah (Elisabeth Sladen) become involved in the intrigues of a noble family. Count Frederico is trying to usurp his nephew, the rightful Duke. Frederico is aided by his sinister astromancer Hieronymus, leader of an equally sinister religion cult the Brethren of Demnos. The Doctor and Elisabeth take up the cause of the Duke and in the process smash a plot of enslave mankind.

The Masque of Mandrago is a step away from the usual Doctor Who episodes. Producer Philip Hinchcliffe has purposely steered clear of the galaxy of traditional Doctor Who villains --- the Daleks, the Cybermen, the Ice Warriors and so on — in order to try and create new and more fantastic forms of alien life, evil though these forms may be. Hinchcliffe is highly conscious of the wide Dr. Who viewing range which starts at age five and continues on to people in their nineties. It is to cater for this older group of Dr. Who fans that Hinchliffe has aimed for something new in The Masque of Mandrago.

Also new is the interior of the Tardis. In this episode the Doctor opens a forgotten door in 'the Tardis and finds a new control room. (Because of its alien construction, the Tardis has always been much bigger inside than it appears front the outside)

Following hard on the heels of The Masque of Mandrago is another highly original four-episode Doctor Who adventure - The Hand of Fear. From the sound of it, this one will have everyone under the age of twelve going to bed with terminal nightmares.

The Doctor and Elisabeth discover a 150-million-year-old hand buried near to a nuclear power station. Although the hand is in a semi-fossilised condition, it soon , begins to manifest strange powers. Taking over the power station, it turns itself into a Kastrian Renegade, a lifeform from the barren planet Kastria.

That's all we can reveal at the moment, but it certainly seems as if the good Doctor will not be losing any of his huge army of fans over the next couple of months!